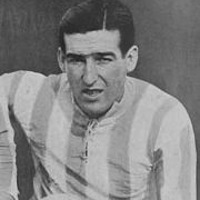 An Olympic goal, also called an "Olimpico," is a goal scored directly off of a corner kick without contact by another player. This unique type of goal was named after Argentine striker Cesareo Onzari’s (at left) corner kick that spun directly into the goal for the reigning Olympic champion Argentina in a 1924 friendly against Uruguay. David Beckham has scored multiple Olympic goals in his career. In 2012, the New York Red Bulls’ Thierry Henry scored in such a fashion after his bending corner kick deflected off the goalpost and into the net completely untouched. No matter how this rare happening occurs—by the wind, the perfect ball rotation or a little bit of luck—it never ceases to amaze.
—LINDSEY PEHRSON