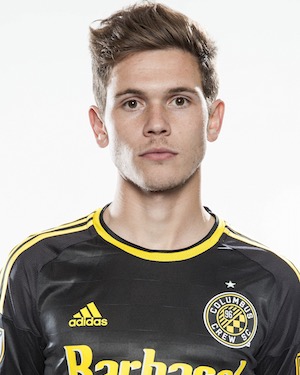 Wil Trapp has been pegged for stardom since he was selected to a U-14 U.S. youth national team camp. The enthusiasm continued through his time with the Columbus Crew’s academy and during two strong college seasons at perennial powerhouse Akron. Stardom should now be on notice, because Trapp is coming. The first part of his rookie season in 2013, Trapp never took the field for the Crew, who signed him months earlier to a homegrown contract. But after returning from starting for the U.S. in midfield at the U-20 World Cup, Trapp moved into the Crew’s first XI and hasn’t left. Neither a strong-willed destroyer nor a creative playmaker, Trapp is a classic, modern two-way central midfielder who uses smarts and clean technical ability between the 18s. He’s also a pretty good leader, having been named the Crew’s vice-captain in 2014 despite being just 21 at the time. Trapp will rarely wow you but those with a keen eye will see a player who makes his team better and it’s likely a matter of time before that team is the U.S. senior one. —BROOKE TUNSTALL