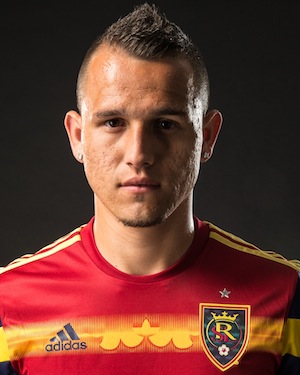 The future is bright for Luis Gil—few would dispute that—but from a national team perspective, when does this talented youngster's present begin?

On the club level Gil has already becoming a force. The midfielder starts more often than not for Real Salt Lake, one of the most competitive teams in MLS. And with more than 100 appearances to his name before he turned 21 and a reputation for having great vision and a simple-but-effective approach to the game, Gil is commanding respect across the league.

When he was just 12, Gil, a Southern California native, trained with the U-15 team at River Plate in Argentina. At 14, he moved to Bradenton and was the youngest—and possibly the best—player at the U-17 residency program. He would go on to perform well at the 2009 U-17 World Cup in Nigeria and was named U.S. Soccer’s 2009 Young Male Athlete of the Year.

Arsenal wanted to sign Gil. Manchester City and Real Madrid expressed interest. And yet Gil opted to stay in the U.S. and ply his trade in MLS. He is making steady progress (and a healthy salary), but is the onetime prodigy developing as fast as he should? Debatable.

"I think he has exceeded my expectations for sure about where he would be in his third year as a pro in MLS and with Real Salt Lake," former RSL coach Jason Kreis told MLSsoccer.com. But now is no time to rest on his laurels, Kreis said: "I think his development has come along very well, but I still think he has a long way to go as well.”

While Kreis was focused on beating the Colorado Rapids or the San Jose Earthquakes, Gil is dreaming of playing alongside, and against, the best players in the world. Do not be surprised if the soft-spoken Gil moves to Spain or England in the next couple years as he attempts to forge a career among the big boys.

As for his international career, Gil has already represented the Stars and Stripes at the U-17, U-18, U-20, and U-23 levels - he was the Americans' best player at the 2013 U-20 World Cup - and earned his first cap with the senior team after the January camp in 2014. With all that as a backdrop, the big question is when Gil permanently breaks in with the senior team. —JOHN GODFREY