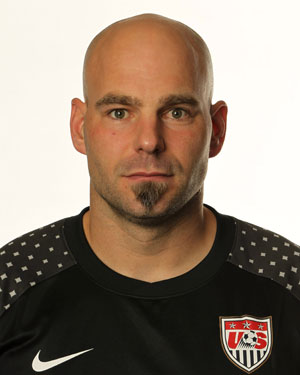 Marcus of the Midlands

Marcus Hahnemann was set to join the military, but when you're 6-foot-3 and blessed with lightning-quick reflexes, other opportunities sometimes present themselves. "When I was 18, I wanted to go into the Marines to fly helicopters,” Hahnneman told FourFourTwo.com, “but I ended up going to university first, and then someone decided they wanted to pay me to play [soccer] for a living.”

Hahnemann's aggressive netminding style mirrors his taste in heavy metal and huge cars, and it served him well in stints for teams including the Colorado Rapids (1997–1999), Fulham (1999–2002), and Reading (2002–2009). The big bald goalkeeper earned his first cap with the United States during a 1-0 loss to Trinidad and Tobago in 1994, played in two more matches in rapid succession, and then didn't feature for his country for eight and a half years. It's the longest break between appearances in the history of the USMNT.

Hahnemann made the 2010 World Cup roster but didn't see any action. It's more than likely that the nine caps he currently has will be the only ones he wins. But that's fine with him. Hahnemann, who turned 40 in June 2012, sees his career winding down. He's without a club and thinking about the future. "I want to be in Seattle when I finish playing because I've been moving all over the world with football, so if I could fly Kenmore Air, that flies floatplanes from Seattle to Vancouver, I'm happy. That would be pretty good fun doing that three days a week," he said.