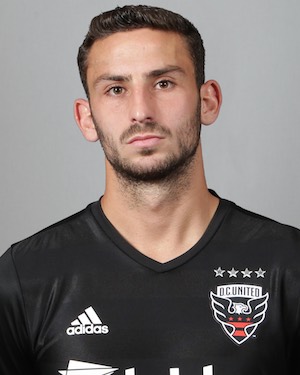 After adding a pair of veteran centerbacks in the winter of 2014, it caught some observers by surprise when D.C. United, coming off one of the worst seasons in league history, used the second overall pick on center back Steve Birnbaum. But with a combination of smarts and skill rarely seen in a rookie defender, Birnbaum showed why he was taken so high.

After missing all but two games of the 2012 season because of a knee injury, Birnbaum lead Cal-Berkeley to a No. 1 ranking in 2013 by anchoring a defense that posted seven shutouts while scoring 10 goals, an unheard of number for a center back in Division I.

While Birnbaum didn’t put up flashy offensive stats as a rookie with United, after cracking the starting lineup a third of the way through the season he used those same ball-skills to calmly and effectively distribute from the back. He also read the game like a veteran and his solid positioning helped United share with the Los Angeles Galaxy for fewest goals allowed in MLS.

“To play the way he has as a center back is very rare in your rookie season,” United general manager Dave Kasper told the team’s website”. “It is a position that takes most players two to three years to figure out, and it took him a few games to get it."

Given his quick transition to the pro game, Birnbaum would seem a natural for a look from Jurgen Klinsmann and it doesn’t hurt that the U.S. skipper is sending his son to Berkeley to play for the same coaches Birnbaum did. –Brooke Tunstall