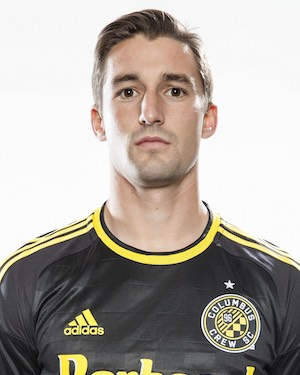 Based on his first two seasons of pro soccer, there was little to suggest Ethan Finlay had a future at a higher level. In fact, MLS was even a fair question. The 10th pick in the 2012 MLS SuperDraft out of Creighton, Finlay started only six of the 34 games he played in his first two seasons and failed to register a goal or an assist. This, for a player who scored 43 times in college and was a finalist for the Hermann Trophy his senior year. But apparently Finlay just needed a little time to adjust. Finlay began 2014 seeing spot duty off the bench and finally broke his scoring duck in mid-May of that season against Portland. And then things started to click. Over the final 24 games of the season Finlay took advantage of the superior pace and scorers’ mentality he had in college to finish with 11 goals and 7 assists, helping the Crew advance to the second round of the playoffs. Finlay’s 2014 goal total tied him for fourth among American players in MLS—he was even with Luis Silva and behind Lee Nguyen, Gyasi Zardes, and Chris Wondolowski. Worth noting: none of those four had as many assists as Finlay did. That type of productivity has resulted in national team call-ups for Wondolowski, Nguyen, and Zardes. If Finlay, who has the pace to play as a wide midfielder or a withdrawn striker, builds on his 2014 showing, perhaps he too will get a call, though it should be noted that he's also eligible for Canada, his father's homeland. —BROOKE TUNSTALL