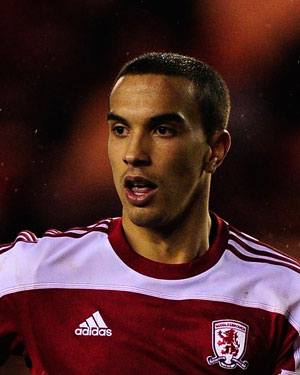 If things had gone differently for Seb Hines, he might be starring for the English national team. The tall, strong, smart central defender appeared on multiple young teams—captaining the country's U-16 squad and playing for the U-17s and U-19s—but frequent injuries stunted his development and limited his opportunities. He is currently out of the English system, but the Three Lions' loss could be the United States' gain.

Hines, who has an English mother and an American father, joined Middlesbrough at 14. He seriously hurt his knee three years later in 2005 but recovered to make his first senior team appearance in a 2007 FA Cup match against Hull City. Hines scored in the debut. Injuries continued to rob the defender of time and he only made 51 appearances between his initial game and the end of the 2012 season. But Hines doesn't turn 25 until May 2013 and he finally seems to be fully recovered. Middlesbrough's ownership apparently believes so as well, signing the player to a three-year contract extension in the summer of 2012.

Hines's improving play has people around the United States wondering if he'll find his way to the Stars and Stripes. The defender sounds interested. "It just would be a great honor," he told The New York Times in early 2012. "One of the reasons why is that my dad has been a massive influence on my career. To give something back to him would be amazing. I've always wanted to play international football and definitely with the United States." Klinsmann has not called in Hines to date, but he could soon get a shot.—NOAH DAVIS