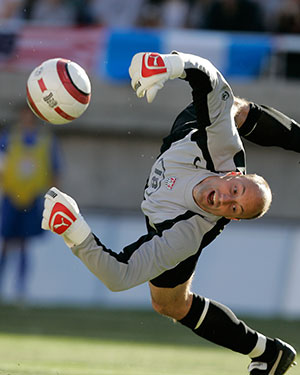 Any discussion of long-serving goalkeeper Kasey Keller must begin with his sublime showing in the 1998 Gold Cup victory against Brazil. The 1-0 triumph represents the U.S.’s only win against the world power, and without Keller’s masterful performance it could have gotten out of hand early in favor of the South Americans. But a transcendent Keller produced 10 (TEN!) saves, some of almost comical difficulty, in a display that left the world champs shaking their heads and compelled star striker Romario to comment: “That is the best performance by a goalkeeper I have ever seen.” Unfortunately for strikers across the world, that was not the only match he ever played. At the club level, Keller had a long European career that saw him make over 500 appearances for clubs in England, Spain, and Germany. He finished his career with three years in front of an adoring hometown crowd for the Seattle Sounders, culminating in an MLS Goalkeeper of the Year award in 2011, his final season. It is a testament to Keller’s class and consistency that he earned 102 caps during the age of Brad Friedel and Tim Howard—the most ever for an American backstop. Unfortunately for U.S. soccer fans, Keller was not at his best in the two World Cups in which he was the No.1 goalkeeper—1998 and 2006. Keller conceded two or more goals in all but one of his five starts, with the Yanks bowing out in the group stage in both tournaments. That is not to say Keller never impressed for the Stars and Stripes, though. He did on several occasions, notably the aforementioned 1998 win against Brazil and also the 2005 Gold Cup final against Panama, when he saved two penalties in the decisive shootout. And throughout 2005 Keller dominated World Cup qualifying, at one point not allowing a goal for a stunning eight-plus hours of play. For his efforts Keller was named U.S. Soccer Athlete of the Year, to go with his awards in 1997 and 1999, tying him with Clint Dempsey for second all-time and leaving him trailing only Landon Donovan’s four. Nowadays Keller is active in the broadcast booth. He is the color commentator for the Sounders and also provides occasional analysis as part of ESPN’s growing soccer coverage. Despite never shining in a World Cup like Friedel or playing for a massive club like Howard, Keller is certainly in the discussion for greatest American goalkeeper. Some would say he belongs firmly at the top. Re-watch those Brazil highlights and you might be right there with them.
—BLAKE THOMSEN