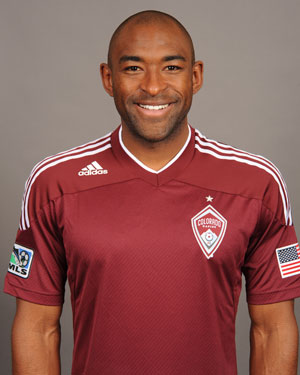 This or That with Marvell Wynne

Marvell Wynne is a type of player who is becoming an endangered species in Major League Soccer. He has world-class athleticism—Wynne is one of the fastest men in the league, running a 10.39 in the 100-meter dash—but he's not particularly skilled. This isn't meant to be a knock, since he's done very well for the New York Red Bulls, Toronto FC, and the Colorado Rapids, but he doesn't have the quality to make a significant impact on the United States national team. Unrelated but also relevant: Wynne is one of the nicest people in MLS.

He grew up in an athletic family, with a father who played professional baseball, but he chose another type of ball. "Soccer was fast and I enjoyed that most about the game," Wynne told the Denver Post. "That’s why I chose soccer." He spent two years at UCLA before being selected first in the 2006 MLS SuperDraft. Wynne stayed in New York for two seasons, but never reached his potential and eventually was shipped to Toronto. He spent 2007 to 2010 north of the border, earning his first full national team cap at the 2007 Copa America and starting for the U-23 team in Beijing during the 2008 Olympics. The next move found him in Colorado, where he's been ever since.

Wynne has shown versatility throughout his career, playing at both right and center back. He's a more natural fit for the latter position, but his talent only goes so far. While Wynne is a solid MLS player, he's likely not an international.—NOAH DAVIS