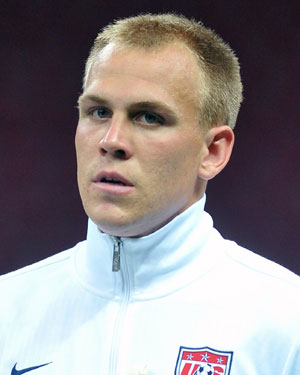 American goalkeepers and English clubs—Keller, Friedel, Sommer, Hahnemann, Howard, Guzan. Heck, even Meola for a little bit. You know the list. Consider that since 1994 Nick Rimando is the only U.S. goalkeeper to make a World Cup squad that’s never played for an English club. All signs point to Cody Cropper joining that list. The Minnesotan joined Southampton at 15 and has worked his way up to the first team, making the game-day roster several times during the 2013-14 season (although he did not take the field). After showing well for the U.S. at the 2013 U-20 World Cup, he caught the eye of Jurgen Klinsmann, who has had him in to several senior team camps, a strong indicator of the regard in which he’s held. At six-foot-four, as a regular with the youth national teams and a product of an English Premier League academy, Cropper checks most of the boxes an aspiring goalkeeper could have. At some point, however, he’ll have to start getting actual first-team games. When, or if, those come, he should become a regular pushing for national team appearances.
–BROOKE TUNSTALL

BBC on Cody Cropper
Cropper Trains With the Big Boys