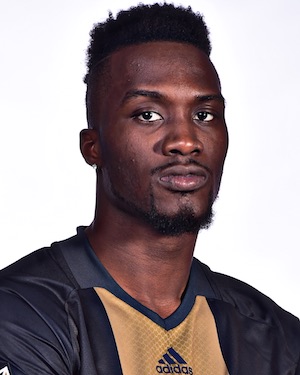 C.J. Sapong has the gift that certain young athletes in any sport possess: the fearlessness that comes only from youthful confidence. The second-year striker at Sporting Kansas City possesses a dynamic game that has caught the eye of U.S. coach Jurgen Klinsmann. Sapong can play with his back to goal, latch onto through balls on the counterattack, hold up play with his impressive ball-handing skills, and has the swagger—and ability—to take on defenders. At 6-foot-1 and 185 pounds, he also gives defenders a lot to handle on set pieces. This multifaceted game earned him the MLS Rookie of the Year award in 2011 and pushed his team into the playoffs along the way.

The Virginia native played soccer at James Madison University in his home state for four years, from 2007 to 2010. Before entering the MLS draft, he played in the United Soccer League for Fredericksburg and in the Premier Development League for Reading. Sporting KC drafted Sapong with the 10th pick overall. In addition to his first-year honors, Sapong had the unique distinction of scoring the first goal at the club’s new stadium, Livestrong Park, getting the best of his marker on a corner kick. "It was amazing, a dream come true,” he told Goal.com. “To see all my friends and family in the stands cheering for me, to see people that are cheering for K.C. cheering for me, it's an amazing feeling."

Likely due to Klinsmann’s taste for players who combine skill with their athleticism, Sapong earned a call-up in early 2012 for friendlies against Venezuela and Panama. While some of the U.S.’s European-based players were away, Sapong earned two caps and replicated his typical energetic play. He has yet to open his scoring account in a national team shirt though, and was left out of Klinsmann’s side for its summer friendlies and World Cup qualifiers. Yet at 23 years old, Sapong’s future looks bright. He’s talked of hoping to play in Europe one day, but in the meantime Sporting rewarded him with a new contract (terms undisclosed) prior to the 2012 season.—ADAM ELDER