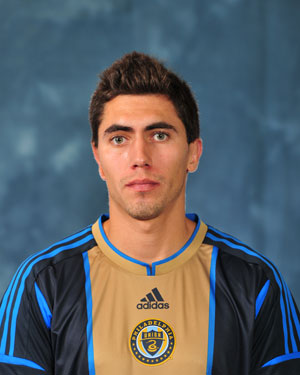 Michael Farfan, the multidimensional midfielder from San Diego, frequently gets overlooked on the field. That may be because of his small stature or because fans confuse him for his twin brother, Gabriel, also a Union mainstay. But they are starting to pay attention. Michael keeps producing and is one of Major League Soccer's most exciting young players. During his rookie season, Farfan, who attended the University of North Carolina, showed an impressive ability to make things happen on the right wing. He thrived in space, using his pace, quickness, dribbling prowess, and vision to excite the home crowd at PPL Park. The 23rd pick in the SuperDraft scored with a cheeky chip against Real Madrid and ended up as a finalist for Rookie of the Year. In 2012, he moved to a more central role where he struggled at first, but slowly learned to link the midfield and the attack. He earned a late call to the 2012 All-Star Game against Chelsea. "I'm very happy, they called me and I couldn't believe it," Farfan told Goal.com. "I'm very happy, this is a great opportunity to be here with all these great players." The Union struggled on the year, but the midfielder continued to improve. “I think I’ve had time to grow throughout the season and kind of find my feel for my position,” he told CBS Philadelphia near the end of the season. If Farfan, who has Mexican heritage but spent two years at Bradenton and played with the United States U-17 team at the 2005 World Cup, keeps getting better, he could make a push for time with the Stars and Stripes. If nothing else, Jurgen Klinsmann is probably keeping tabs on the rising star. The rest of soccer-watching America certainly is.—NOAH DAVIS

Michael Farfan: 'Going to the All-Star Game Is a Huge Opportunity" (Goal.com)
Would Michael Farfan in Freddy Adu’s Role Improve the Offense? (BrotherlyGame.com)