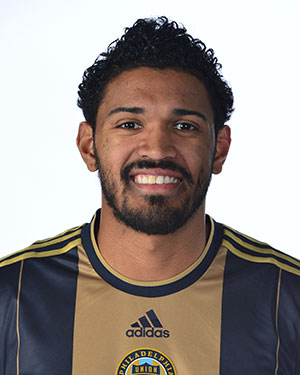 Now that Sheanon Williams has found a good fit with the Philadelphia Union, the fiery right back’s future seems bright.

But it took some time first. Williams, a product of the Bradenton program, played as a member of the U-17 and U-20 American teams. He made the national championship game with the University of North Carolina in 2008, his only collegiate season, then bolted to Europe. A trial with Wolfsburg went nowhere, however, and he returned to the United States without a contract. After training with Real Salt Lake and playing for the Harrisburg City Islanders of the USL Professional Division, Williams found a steady gig with the Philadelphia Union in August 2010. He played eight games that season, and started 32 in 2011.

Williams was a late replacement for Josh Gatt on the U-23 team that failed to qualify for the Olympics in May 2012. It was a surprise call. "I was shocked. It had come out that I wasn't going to be involved (with the U-23s) and I was fine with that," he said at the time. He did not appear in any of the games in Nashville.

He struggled in the start of 2012, but—like many of the young Union players—Williams was rejuvenated after John Hackworth replaced Peter Nowak. "I think everybody is just comfortable," he said soon after the switch. "I think everyone is playing freely, and that's been good for us. That's what we've been needing." Williams needs to continue playing with the Union, shutting down MLS forwards, and improving. He has skills to offer the national team, but only if and when that potential transforms itself into reality.—NOAH DAVIS