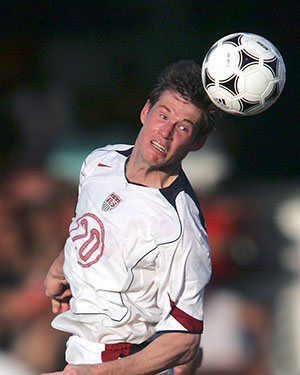 One thing was certain during Brian McBride’s playing career: If a ball was in the air, he went after it. And more often than not, he got it. One of the United States’ greatest all-time strikers, McBride achieved success both domestically and abroad. Currently a Fox Soccer Channel analyst, McBride's work ethic and fearlessness on the field, combined with his affable personality, made him a fan favorite with Columbus Crew, the U.S. national team, and Fulham. McBride rose to international acclaim through his play for the U.S. national team. His World Cup debut came in 1996, where he scored the only goal of the tournament for the Red, White and Blue. His 2002 World Cup performance against Portugal, in which he scored a diving, game-winning header, suggested McBride was a special striker. When he recorded another goal against Mexico in the same competition, the Illinois native proved the point. McBride was the first American player to score in two World Cup tournament—a feat since matched by Landon Donovan and Clint Dempsey. McBride started 111 matches with Fulham and recorded 40 goals in his four-and-a-half years with the Cottages. He was named Fulham Player of the Year for both the 2005-06 and 2006-07 seasons, making him the first American to receive the accolade in consecutive seasons at a top-tier European club. McBride left the club as one of the most respected Fulham players in history, and the club renamed its Craven Cottage pub “McBride’s.” McBride enjoyed success in Major League Soccer too. As the first overall selection in the inaugural 1996 MLS draft, he established himself as a clubhouse leader during his eight seasons in Columbus. The seven- time MLS All-Star tallied 62 goals and 45 assists in 161 games with the Crew. A two-time All-American at Saint Louis University, McBride retired from international play in the summer of 2006 after the U.S.’s early World Cup exit, but briefly returned in 2008 to captain the Stars and Stripes in the Beijing Olympics. He finished his 12-year international campaign with 95 caps and 30 goals—the latter statistic being the third most in U.S. history. In 2008, McBride signed with his hometown team, Chicago Fire, and remained until his retirement in 2010.
—LINDSEY PEHRSON