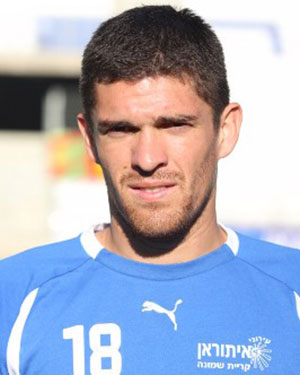 Five years ago, an Argentinean guy playing Champions League soccer for a team in Israel wouldn't have been on the USMNT's radar. And, well, he still might not be. But Bryan Gerzicich is the starting center midfielder for the best team in Israel, a team that came within a game of the Champions League group stages, and not many Americans at his position—or anywhere else on the field—can say that. How is he American? He was born in California, but when his parents' work visas ran out three months before after he was born, the family moved home to Argentina, and he hasn't been back to the States since. His professional career began with Arsenal de Sarandí, but after realizing he didn't have much of a future with the club, Gerzicich moved to a second-division club in Israel. From there, he worked his way up to his current club Kiryat Shmona, which plays in a tiny 23,000-person village known more for being a target of missile-fire than having a good soccer team. Yet, they won the Israeli league last year without much resistance and with Gerzicich as the anchor in the middle of midfield. He's one of the best players in the Israeli league and is considered by many to be the best central midfielder in the league. Oh, and he wants to play for the U.S. Then, what's the problem? He is 28, and he plays a position where the U.S. might have the most talent. But Gerzicich thinks, despite seemingly being in a pretty good spot now, that growing up stateside might've been better for his USMNT prospects. "Everyone would've seen me, so maybe I would've had more chances to play with the national team," Gerzicich said. "In Israel, it's more difficult to be seen, especially with the position I play." While the prospects of an uncapped 28-year-old center midfielder playing a role for the USMNT might seem slim. Gerzicich's case is a curious one, in almost every way. His career, to this point, has defied any traditional arc, so don't write off his chances just yet.—RYAN O'HANLON

An Argentine-American in Israel (ESPN.com)
Gerzicich a Steady Force in Israel (Yanks Abroad)