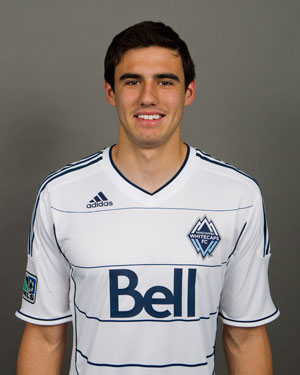 Potential is the word that follows Omar Salgado. The tall, lanky, skilled former No. 1 draft pick could be a star, but potential will only take a player so far. Still, there's one aspect of his game that's already great: the soft-spoken Salgado possesses a lethal left foot.

It was that left foot and, yes, the potential, that prompted the Vancouver Whitecaps to take the Texas native first in the 2011 SuperDraft. "He's the one guy I think can be world-class. He's got everything you can dream of that can be developed into a world-class striker," then-technical director Tom Soehn told Goal.com soon after drafting the forward with the franchise's first-ever pick.

Salgado, who grew up in the Chivas Guadalajara youth system but was forced to leave after accepting a call from Thomas Rongen and the U-20 squad, knows he's not a finished product. "I need to work on my right foot. I'm left-footed and I've always worked on my left foot," he told MLSsoccer.com before the 2011 U-20 World Cup qualifying tournament in Guatemala. The forward played significant minutes during those matches but failed to make much of an impact.

His career has been up and down with the Whitecaps. Salgado hasn't seen very much time and broke his right foot while playing with the U-20s in Uruguay in June 2012. The injury caused him to miss significant time. But Salgado, who turned 19 on September 10, is still, you know, just a teenager. There's time to realize that potential.—NOAH DAVIS