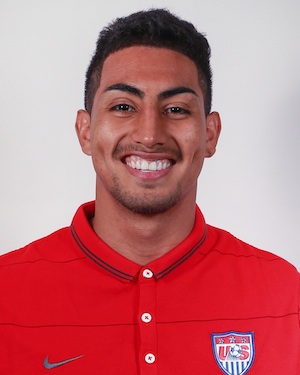 Flores scores for US vs. Turkey 17s

For all the skill he’s teased U.S. fans with and despite the pedigree that comes from signing with a team that had recently played in the Champions’ League final, American fans are still waiting to see just what they have in Junior Flores. The talent is there. He flashed that with U.S. youth teams for years, leading to a lucrative contract from German giants Borussia Dortmund, an offer which came shortly after their runner-up finish in the 2013 Champions League. But despite all that, Flores has yet to make a major impact for the U.S., even at just the youth national team level. During qualifying for the 2013 U17 World Cup, Flores clashed with coach Richie Williams and was used sparingly. And while he helped the U.S. qualify for the 2015 U-20 World Cup, he wasn’t that dominating and often came off the bench during the CONCACAF qualifying tournament in Jamaica. But when he’s on, the son of Salvadoran immigrants is as technical and creative a player as the U.S. has produced in years, able to run at defenders and see a play before others do and then hit the pinpoint pass needed to make the play work. The hope is his time in Germany instills him the discipline and maturity that will help him maximize his considerable skill and finally be able to show U.S. fans just what he can do. – BROOKE TUNSTALL