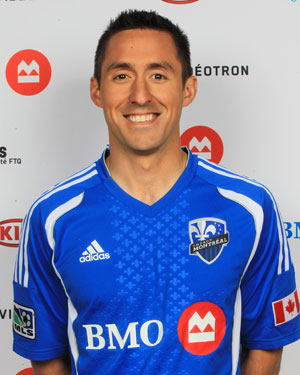 Davy Arnaud: 200 Games with the Wizards

When Montreal’s expansion club needed a captain, they sought out and secured the reliable Davy Arnaud. The East Texan Cajun joined MLS in 2002 with Kansas City, where he made more appearances for the club than anyone else in its history. The midfielder also won the Team Heart Award (given to the most dedicated player) multiple times, several years before he was made captain. It’s a well-deserved honor, as Arnaud harries, hustles, and emotes all game long. As an attacking midfielder he frequently plays on the edge of the box and beyond, and likes to go on sneaky runs behind the defense.

Arnaud played three years in college, earning Division II All-American honors in his junior year. He was selected 50th in the 2002 MLS SuperDraft. After a season and a half spent mostly on the bench, Arnaud made his name in 2004 when he filled in for the injured Preki and helped lead Kansas City to first place in the Western Conference.

Over the next several years he became captain and earned a string of honors. Injuries limited Arnaud in 2011, his 10th season at KC, and, in the face of so much young talent breaking into the first team, he was traded to Montreal.

“Before we traded for him, I said, ‘You’re the guy I look at in the league that I want to come here and help build this,’” Montreal coach Jesse Marsch said. “The type of player he is, the type of person he is, the mentality he has, I knew we were going to need that to be successful.” Naturally, Arnaud scored Montreal’s first-ever goal in MLS.

Arnaud also has seven U.S. caps to his name, although his most recent appearance came with the B team that performed in the 2009 Gold Cup. He hasn’t figured on Klinsmann’s radar since the German took command in 2011, but should Klinsmann ever need two huge doses of experience and passion in the squad, he couldn’t do much better than Arnaud.—ADAM ELDER