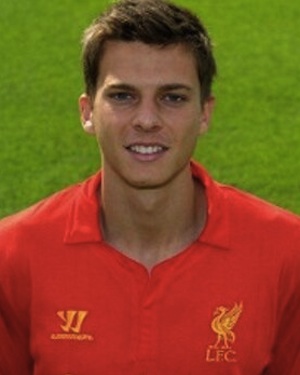 Pelosi a new kid of Liverpool

If adversity truly does make us stronger, Marc Pelosi should be hard as steel by now. A long-time star for the U.S. youth teams, in 2011 a teenage Pelosi took advantage of a European Union passport and passed up MLS and a full ride to UCLA to sign with English giants Liverpool, who were smitten with Pelosi’s skill and ability to control the left flank either as a midfielder or defender. Pelosi’s time at the Merseyside got off to a good start and he was working his way through their youth system and on the verge of a first team debut when disaster struck. Playing in an FA Youth Cup game against West Brom in February of 2013, Pelosi shattered his left leg in two places. For myriad reasons it was a huge setback for Pelosi, who had just been named to Liverpool’s roster for the Europa Cup and was expected to be a focal point of the U.S. at the 2013 U-20 World Cup. That cost him almost all of the ensuing season and while the leg healed, by the fall of 2014 he was still fighting to regain his pre-injury form. Still, U.S. coach Jurgen Klinsmann saw enough in his recovery to invite him to the national team’s January camp in 2015 and the hope is that Pelosi can be a part of the U.S. U-23 side that attempt to qualify for the 2016 Olympics in Rio de Janeiro while also finding first team minutes in England. – BROOKE TUNSTALL