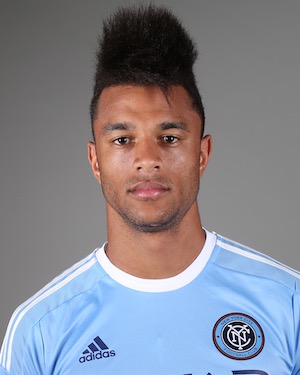 Speed kills. Speed, size and skill really kills. Khiry Shelton has all those.

A mercurial talent dripping with physical gifts, Shelton spent much of the first three seasons of his college career at Oregon State frustrating MLS scouts as he teased them with potential but spent almost as much time on the shelf with various injuries as on the pitch.

But he got healthy before his senior season and blossomed into the player the MLS watchers thought he could be, winning Pac-12 offensive player of the year honors and being the only player in Division I to reach double-figures in both goals and assists in 2014.

The productivity combined prompted New York City FC to take Shelton second overall in the 2015 draft, intrigued by a six-three player with track star speed, a passer’s vision and a nose for the goal. Shelton cracked the game-day roster from the season-opener and was starting soon thereafter, using his wheels to stretch the field and create more space for crafty teammates like David Villa to operate.

The strong start to his rookie season caught the attention of U.S. U-23 national team coach Andi Herzog, who brought him into multiple camps his rookie year. Shelton’s athleticism has some thinking he may eventually settle as an overlapping fullback but whether it’s on the backline or in the attack, as long as he’s healthy Shelton figures to be giving opposing teams fits. – BROOKE TUNSTALL