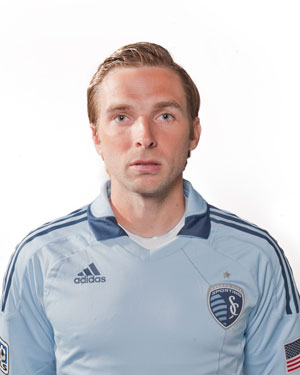 Few American players have had a career as rich and varied as Bobby Convey. Among the second generation of Americans to shine in the United Kingdom, Convey was part of U.S. soccer’s breakthrough generation that includes Clint Dempsey, DaMarcus Beasley, and Landon Donovan.

Playing on the left side with speed, craft, and cleverness, Convey has shined in MLS and two English divisions, racked up nearly half a century of international caps, faced lengthy injury spells and multiple knee operations, feuded with his national team coach, earned promotion and suffered relegation in Europe, competed in the World Cup, and returned to the States to successfully resurrect his career. Five years after joining Reading (for the club’s record transfer fee), Convey returned to MLS in 2009 with San Jose, and joined Sporting Kansas City in 2012. He’s been away from the national side for years after falling out with Bob Bradley, but many fans argue that his continuing excellence, now as a left back, should merit his consideration into a national side with a long-running hole at that position.

Convey was a member of the IMG Academy’s inaugural class, alongside Donovan, Beasley, Oguchi Onyewu, and Kyle Beckerman. He bypassed college and was drafted at age 16 in 2000 by D.C. United. He made an immediate impact, starting in 18 games his first season. A move to Tottenham Hotspur in 2003 fell through due to his inability to secure a work permit. He spent (some fans say “sulked through”) the following season in D.C., then a year later signed with Reading. He played a crucial role in Reading’s promotion to the Premier League in his second season, but injured himself in his first season in the top flight, missing most of the year and undergoing several knee operations over the following seasons. Reading, back in the Championship, released him in 2009, and he signed with the Earthquakes. After an uneven relationship with coach Frank Yallop, due in part to his initial reluctance playing left back, Convey was released in 2011 and signed with Sporting KC for the 2012 season.

Despite having nearly 50 caps under his belt, the outspoken, often stoic Convey didn’t find a regular place on the side under coach Bob Bradley, and was eventually shut out altogether, for what he maintains are personal reasons. But with his Lazarus-like career resurrection at left back, Convey, a perennial MLS All-Star, and many fans think he deserves a second look.

“It would be a long break between appearances,” Convey said after Klinsmann’s appointment, “but [playing with the national team] is something that I’ve always thought I would end my career with.”—ADAM ELDER