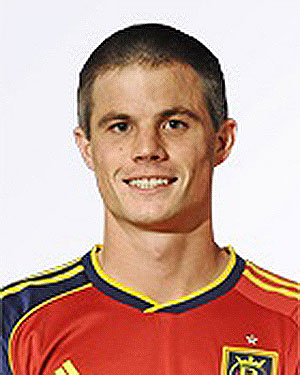 As recently as 2008 Justin Braun didn't think he was going to be a professional soccer player. But Preki, the former Chivas USA coach, saw the fast, athletic, but not overly skilled forward at an amateur tournament and signed Braun to a development deal. Half a decade later, Braun has played in more than 100 MLS games with 24 goals to his name.

Braun grew up in the Salt Lake City area and was the leading scorer in Utah during his junior and senior year of high school. After a spell at Salt Lake Community College, Braun assumed his competitive soccer career was coming to an end. But fate intervened and Preki brought the youngster into his squad. Braun impressed for Chivas USA in preseason, and he made his debut on March 30, 2008. He scored four goals that season and three the next. (A concussion limited him to 15 matches in 2009.) Braun, who has a lot of Brian Ching in his game, tallied 17 goals between 2010 and 2011. He earned calls to Bob Bradley's January camps both years but did not play in any matches.

Chivas shipped Braun to Montreal before the start of the 2012 season, but Braun didn't score with the Impact before being being sent to Real Salt Lake. Not surprisingly, he was excited to return home. “We had season tickets to Real Salt Lake," Braun told ABC4.com after his first practice with RSL. "I remember sitting up in the stands five years ago when I was just a fan watching, thinking how cool it would be to be in the league, let alone step on the field for the hometown team. It's an honor to put on the jersey."

Braun remains the type of player who gets more from hustle and hard work than innate talent. Still, if he can get on the field and find his scoring touch, he could evolve into a contender for one of the last forward spots on the U.S. roster.—NOAH DAVIS

Justin Braun Thrilled to Be Back Home (ABC4.com)
Montreal's Justin Braun on the Move Again; I'm Wondering Why (ProSoccerTalk.com)