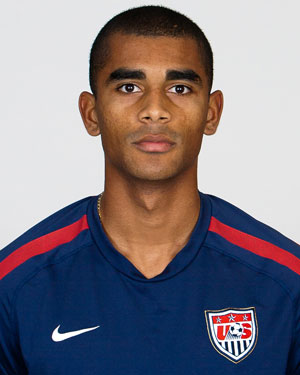 Tony Taylor, a speedy winger who prefers to play on the right side, bounced around the soccer world for a spell but seems to have found a home in Portugal. The Estoril Praia player, currently on loan to Atletico Clube de Portugal, is striving to develop technical skills that match his extreme physical gifts.

Taylor spent a season at the University of South Florida (2007) and another at Jacksonville University (2008), drawing the eye of former U.S. youth coach Thomas Rongen. Taylor played all three matches during the 2009 U-20 World Cup, scoring the winner against Cameroon. After a failed audition with the Norwegian club IK Start, Taylor signed with the controversial sports marketing agency Traffic in December 2009. Traffic sent the player to one of its clubs, Estoril Praia in Portugal. He initially struggled to find playing time, but stuck it out and continued to develop.

"In the end it was a good decision," Taylor told ESPN.com about the decision to stay in Europe. "The first couple years were tough. I wasn't getting much playing time; I would come in off the bench. But I stayed working hard, stayed after training, and I think it paid off. I've developed a lot and taken it well. It's made me mentally tougher."

Taylor also moved up the U.S. ranks, coming on as a substitute in the U-23's 2-0 win over Mexico in February 2012. He was the last man added to the CONCACAF Championship roster, although he didn't see any playing time in Nashville.

Taylor, fresh off a loan to Atletico Clube de Portugal, looks ready to contribute more significantly to Estoril in 2012. "It's going to be my first season in the first division and I'm going to make the most of it. I want to make a big impact in the Liga Sagres this year," he told Yanks-Abroad.com before the season began. Taylor's success has Panama inquiring about his services—both his parents are Panamanian—but the 23-year-old seems committed to the United States for now.—NOAH DAVIS

New Breed of Americans in Europe (ESPN.com)
Taylor Has a Few Tricks Up His Sleeve (MLSsoccer.com)
Panama Recruiting Taylor (Yanks-Abroad.com)