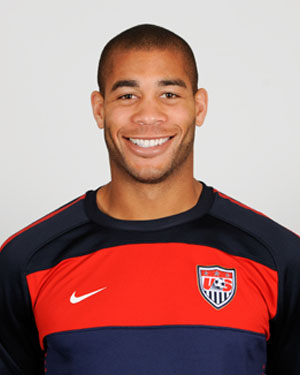 Everything Oguchi Onyewu does is large. His athleticism—at least before he tore the patellar tendon in his left knee—was off the charts, and he dominated with his pure physicality. Onyewu has struggled to return to his once-stellar form and is slipping down the American depth chart.

The U.S. Soccer lifer played alongside Landon Donovan and DaMarcus Beasley on the 1999 U-17 World Cup team. Onyewu jumped to Europe in 2002, signing with Ligue 2 club Metz. He joined Standard Liege the next season and earned his first cap with the American side in late 2004. He played well for the American side, earning a Best XI performance at the 2005 Gold Cup, then started three games during the 2006 World Cup. The tournament ended poorly, however, as Onyewu gave away a fateful penalty kick just before halftime against Ghana.

Onyewu recovered from his disappointment and went on to star for club and country. On the strength of his national team efforts Onyewu was named U.S. Soccer Athlete of the Year in 2006. He helped the Americans to a 2007 Gold Cup victory and Standard win two consecutive Jupiler League titles in 2007-2008 and 2008-2009. (A 2007 loan to Newcastle didn't pan out, however, as he didn't catch on with the English club.) AC Milan came calling during the summer of 2009, and Onyewu became the first American to sign with the famous club. He never played a competitive match, however, tearing his tendon during a U.S. qualifier against Costa Rica. Onyewu returned to the U.S. lineup in time to make the 2010 World Cup roster but wasn't at full strength and conceded his starting spot after the second match.

The next year saw him fighting to return to form, first on loan to the Dutch side Twente and then after joining Sporting on a free transfer. Onyewu worked his way back into shape. "I’m happy right now. I think I’m in a good place, a good position to get back to where everyone esteemed I was prior to my injury," he told Goal.com in October 2011. But Onyewu, who moved to Malaga during the summer 2012 transfer window and just last week signed with Sheffield Wednesday in the English Championship, is not the player he once was. He's lost some pace, lost some confidence, and lost some of that massive swagger. Can he work his way into form in time for the 2014 World Cup? That's the big question now.—NOAH DAVIS