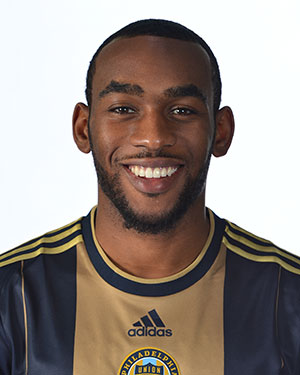 Amobi Okugo is soft-spoken and humble off the field but a monster on it. He delivers crunching tackles, both as a defensive midfielder and as a central defender. He prefers to play in front of the backline, but he wants to please his coaches and will play where needed.

Okugo started at IMG Academy, earning six caps for the U-17s in 2007. He moved to the U-20 the next year and Top Drawer Soccer named him the No. 1 recruit in 2009. After a year at UCLA, the Californian signed a Generation Adidas contract and joined the Philadelphia Union. It was a long cross-country trip, but he managed. "It's cold, man, but I've adjusted," the midfielder told MLSsoccer.com after his rookie year. "I got a couple winter coats. Some hats. Some beanies."

He played in just 12 matches for the Union during his rookie seasons in 2010 but had a strong showing on the Generation Adidas trip following the season. He served as a leader on and off the field, bringing the squad together while organizing the backline and midfield. His play earned a training stint with the Bundesliga side Freiburg, and he showed well. "It was a good week, a great experience," he said. "The Freiburg coaches said they were going to talk to my agent, and they gave me a lot of positive feedback and they said they were going to watch on the Generation Adidas tour. So I'm just hoping to hear what they might have for me, even it's just to get feedback from them."

Okugo didn't find the playing time he wanted in 2011, but he played for the U-20 team at the CONCACAF Championships and continued to develop. He earned a starting spot with the Union in 2012, fitting in nicely with the young team and also played for the U-23s during the ill-fated Olympic qualifiers in Nashville.

Okugo remains a work-in-progress—not surprising for a player his age. He needs to improve his passing, possession, and positioning, but he is nothing if not determined. But he's been a consistent starter for the Union with over 100 MLS appearances at age 23 and an eventual call for the U.S. senior team is more likely than not.—NOAH DAVIS