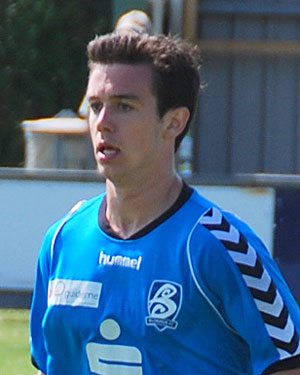 Conor O’Brien is self-aware and not the least bit shy about discussing his game: "I would describe myself as an attacking possession player. I try to play 'The Beautiful Game,' which involves being technically sound and efficient," the midfielder told SoccerBanter.org. "That being said, I am surprisingly good in the air considering I'm not the biggest guy on the field."

A standout career at Bucknell wasn't enough to get the Mount Sinai, New York, native a spot on an MLS team, so he tried his luck in Denmark. O'Brien didn't catch on after a trial with Valjej but earned a one-game shot with division two side Blokhus, where he impressed coach Soren Kusk and signed a six-month contract. O'Brien took a bit of time to get accustomed to his new surroundings, then he exploded for 11 goals in the final 18 games of the 2010-2011 season. That led to a year-and-a-half long contract with Superliga squad SønderjyskE.

Once again, O'Brien sat on the bench waiting for a call, and once again it came midway through the season. With SønderjyskE lagging in the standings, Lars Sondergaard inserted the 23-year-old into the holding midfield role, where his vision, possession, and willingness to strike from distance immediately helped the team. He looks poised to see plenty of action going forward. OBrien, who has never played for the U.S. on any level, is forging a nice little European career for himself.

"I’ve always been a small-town type player," O’Brien told The New York Times in 2012. "I don’t have an agent. I’ve gotten here all on my own. But my biggest quality is that everywhere I go, my team wins. I expect to keep progressing and it’s my goal to play in the Champions League."—NOAH DAVIS

Q&A with Conor O'Brien (SoccerBanter.org)
O'Brien Blazing His Own Path in Denmark (NYTimes.com)