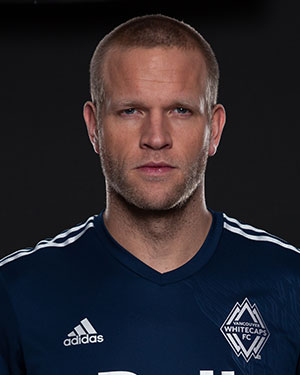 That Jay DeMerit ever made it as a professional soccer player is a Wisconsin-size miracle. But more than that, it's a credit to his attitude. The "good guy" in sports moniker gets kicked around far too often, but in DeMerit’s case it's warranted. The unheralded University of Illinois at Chicago player moved to England after graduation, stayed positive, played wherever he could (including Sunday pub leagues), and basically willed himself on to Watford and the U.S. national team. "Jay DeMerit came from nothing and made a decision to be something," Watford manager Aidy Boothroyd told Sports Illustrated. "He's the Rocky Balboa of English football."

DeMerit joined the English Championship side Watford in 2004. On May 21, 2006, he scored the game-winning goal in the club's playoff promotion match against Leeds United, helping the club reach the promised land of the English Premier League. DeMerit's strong play caught the eye of Bob Bradley, and DeMerit debuted for the Stars and Stripes on March 28, 2007. The central defender’s game is built around fearlessness, guile, and a great sense of danger, and DeMerit paired well with bigger centerbacks such as Oguchi Onyewu. His standing in the team grew as World Cup qualifying continued, and he started all four of the matches in South Africa.

DeMerit ended his time with Watford in 2011, signing with MLS’s Vancouver Whitecaps. He captains the squad, but failed to capture the attention of Jurgen Klinsmann. The American head coach favored younger men and DeMerit's sometimes-loose passing likely troubles the technical-minded German. "I watch the U.S. games and I know there’s a lot of talent to choose from,” DeMerit told Goal.com. “There’s a lot of guys that need to be groomed toward the next World Cup. The good thing about myself is that you know what you’re going to get. If [Klinsmann] needs a player like me then I’m ready. If not, then I’ll go and cheer the U.S. guys on and have more rest to be fresh for the Whitecaps, so as far I’m concerned it’s a win-win situation."

DeMerit has faced long odds before, and he’s the sort of guy who takes things in stride. The approach worked before, and who’s to say it won’t work again?—NOAH DAVIS