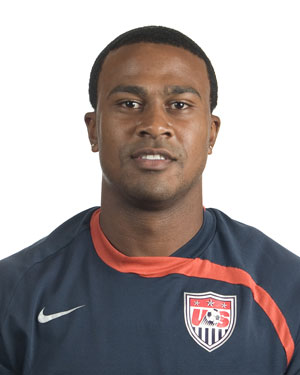 Solid, speedy, and direct, Robbie Findley is a classic No. 9 striker. So it’s no surprise the onetime U.S. international finds himself in England at second-division side Nottingham Forest. Long-ball or counterattacking styles of play suit Findley’s game, as he’s able to latch onto long passes at full speed. The big question with Findley, however, is his ability to finish. Former U.S. coach Bob Bradley fell in love with Findley’s pace, and he gave the striker his first call-up in 2007. Findley eventually became one of Bradley’s go-to attackers, starting three games in the 2010 World Cup.

The Phoenix native played college soccer at Oregon State for four years, joining the Los Angeles Galaxy via the 2007 MLS draft. The Galaxy traded Findley to Real Salt Lake several months into the season. And Findley developed into a legitimate threat in Utah, scoring a goal roughly every three games. In 2009, Findley capped his best professional season by helping RSL win the MLS Cup, scoring against his former team in the final. Following the 2010 season, Findley signed with Nottingham Forest but suffered an injury almost immediately after arriving in England. In September 2012 he was loaned to the League Two side Gillingham, in England's fourth division.

Findley remains scoreless while wearing the U.S. shirt—a stat that may not change anytime soon. Jurgen Klinsmann hasn’t called up Findley since taking over as coach of the national team, preferring other strikers more naturally adept at holding the ball up and helping retain possession. Nevertheless, Findley’s club coach, former England manager Steve McClaren, says of Findley: "He is as fast as lightning. He is quick, he covers a lot of ground, he works for the team, he defends when he has to, and most importantly, he can get a goal."—ADAM ELDER

American Robbie Findley Loaned Out to Fourth-Division Gillingham (SportingNews.com)
McClaren: Findley Can Have Big Impact with the Reds (ThisIsNottingham.co.uk)