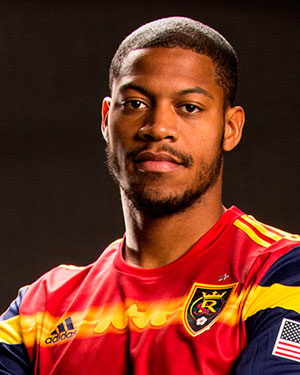 All Chris Schuler has ever seemed to need is a chance to prove himself. In college he didn’t play as a freshman at Indiana so he transferred to Creighton and by the time he left school he was a three-time All Missouri Valley Conference defender and an All-American. At Real Salt Lake, which drafted Schuler 39th overall in 2010, he was stuck behind a pair of MLS Best XI center backs in Nat Borchers and Jamison Olave and only played once as a rookie. But he showed enough in spot starts (25 of them) the next two seasons to convince RSL to send Olave, a former MLS Defender of the Year, to the New York Red Bulls in 2013 and since then only injuries have kept Schuler out of the starting lineup. When healthy, he has used his six-foot-four frame to aplomb, dominating in the air and going in strong on tackles. He also showed a surprisingly Eddie Pope-like knack for scoring big goals on set-pieces in the playoffs, scoring twice to help RSL to MLS Cup in 2013. He’s not the prettiest defender but he’s effective and one wonders what he’d do if he were given a chance at a higher level.—BROOKE TUNSTALL