Benji Joya has accomplished all the goals he has set for himself. So, what's next? 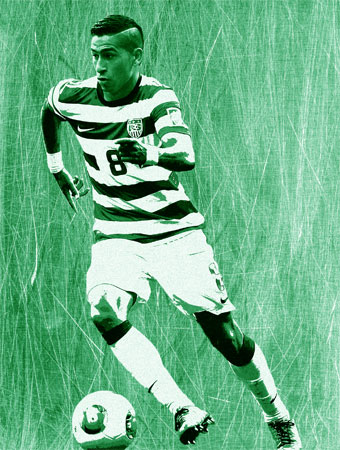 I don’t remember much, but when I played in a recreational team. It was little league, nothing special. It wasn't like U.S. Soccer or NorCal, nothing like that. I had a lot of good memories from that. It was my first team. My uncle put me in it when I was four years old. [It's] how I started loving the game of soccer. In that team I feel like it was one of the best times of my life because we won so many championships. We would always win every tournament we were in. It was really nice.

Back then I used to go see my cousin play a lot when I was younger. His name’s Arturo. To me, he was the great inspiration. He was very good. When I was young, I went to see my family play a lot because I didn’t watch a lot of TV, especially not soccer. When I started watching soccer, it was Cuauhtémoc and Pavel Pardo for America.

It’s a good feeling. I never even thought I would. Obviously every player's dream is to play for a national team. Getting called up for my first camp and wearing the official suit was just amazing. it was in Uruguay versus Uruguay actually [June 6, 2012]. Lots of things going through my head: I’m representing my country, I’m making my family proud, trying to make my country proud. Lots of things that go through a player's head. It was a great honor. I hope it continues that way because I obviously want to continue to represent my country.

A player who knows how to read the game and make smart choices.

A stiff player. A player who’s not that flexible. Like agility-wise, players who struggle to move quickly. And it takes them more time to be defending or to be attacking.

I come from a family that taught me to always dream and always make those dreams come true. The only way that's going to happen and has to happen is me trying hard and trying my best at everything. I take every practice like it's the last practice I was going to have or the last game I was going to have. Being strong-minded helps a lot. The biggest thing would be discipline.

My dribbling. The role I play, it’s kind of hard for me to dribble, but it would make me a better player. And keep on working on my passes, I have to be efficient with the passes, complete most of my passes. Being able to keep the ball and picking out players.

I think my family because without their support I wouldn’t be where I am right now. They trusted I was going to do good in Mexico. For a family it’s hard obviously letting their child go. Unfortunately, I have friends that their parents didn’t support them. My family support obviously boosts everything.

I’d have to say Danny—Daniel Cuevas. Me and him met at the airport actually, coming down over here. When I first got here I was 17. We got here on June 20th, 2011. Left right after I graduated high school. We just hold it together. We got united. And obviously we’ve pushed each other to want, first of all, to stay here. We were here for a tryout. And we both talked to each other, "You can do this better." We criticized each other as well as we told each other what we were doing good. We've made it to a national team together. I know he’s been a part of the U.S. national team way before with the U-18s. This was my first year with the U-20s, He really gave me a lot of advice. He gave me a heads up of what it was going to be like because I had no clue what it was going to be like. We’re just great friends. What can I say? I look at him as a brother because of how far we’ve gotten together.

When we first came here to Santos, my goal was to debut with the first team. Luckily I made it happen last year on my birthday, actually: September 22th. The other achievement I did was playing a World Cup. It’s every player’s dream to play in a World Cup. It doesn’t matter if it’s a U-17, U-20s, or men’s squad. It’s a World Cup, you know? Not a lot are fortunate to be able to say they played in one. Debuting and a World Cup have been great achievements so far, and hopefully there’s more to come.

In Santos, obviously, it’s been a struggle with me keeping my spot in the first team. It’s been really hard honestly cause of the players that come in. Because I was with the U.S. national team program I was out for a while. I missed half of the season because of preparation for the World Cup. It really threw me off with the first team. There’s other players coming up and they’re spending more time with the first team. So they hold on to that. It’s just starting all over. You could say it’s a disappointment, yeah. I was doing something good, but it affected me from another thing over here with my team in Santos. It doesn’t bring me down though. I’m still gonna keep on working hard and hopefully get my spot back. In the World Cup, obviously I expected more from us. I actually wanted to get through to the next round. I feel we had a very strong team. I don’t know I just had a lot of expectations. I honestly thought we could make it all the way to the final and hopefully take the championship.

In soccer there’s ups and downs. Obviously, we can never stop working hard.

I actually got to play along with Sebastian Lletget. He plays for West Ham. He’s one of the best players I’ve ever played with. Very technical player and smart, smart. He could read the game. There’s a reason why he’s over there playing in Europe. And then here in Santos, in the first team I play with Hachita Ludueña, No. 10. He’s been a person I’ve been looking at because of the role I play. Playing with him, this guy's just magic.

France. Paul Pogba was really hard to handle. He was just tall. Big, tall guy and I feel like one step of his played while running was three of mine. So it was really hard keeping up with him. Obviously, Spain is a pretty good team.

Since I was young, I’ve always wanted to be a professional soccer player. But I mean I feel like if I didn’t go for soccer, I'd probably want to be a lawyer.

Having achieved all the goals that I set my mind to. Every goal I set myself, I know I can accomplish. Accomplishing those goals, I feel like that would be the biggest success.