The promising Philadelphia Union defender talks about the mental aspect of the game. 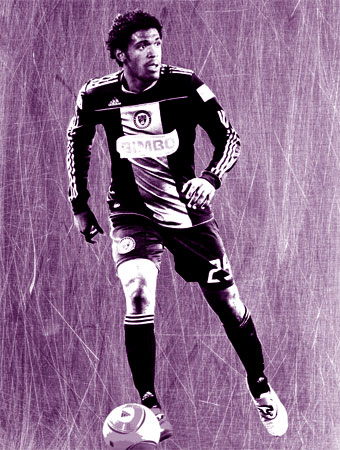 Earliest memory of soccer is watching my brother play. We are only 18 months apart, so after a year they let me join his team.

My soccer hero growing up was my Dad. There wasn’t much soccer on TV but when I was little, my Dad used to play with my me and my brother, and he was pretty good.

My first experience suiting up for the national team was exciting. It was in a tournament in England. I scored my first international goal in our first game against Italy.

The quality I admire most in a soccer player is the ability to be cool under pressure and make the smart decisions instead of panicking.

The quality I most dislike is when people dribble aimlessly with their head down.

The key to my success is to always keep working hard. There are always things that you can do to get better. You can never settle and think you’re good enough.

I would like to improve my decision making. I want to more times than not make the right decisions with and without the ball—defending and also attacking.

A person that has had a great influence on my development is Coach Hackworth. He has coached me since I was 15 and I don’t think I would be where I am without his influence.

I have so many friends in the game, it would be hard to name just one.

My greatest soccer achievements would have to be getting to represent the U.S. on three big occasions: the U-17 World Cup, the U-20 World Cup, and also the U-23s when trying to qualify for the Olympics.

My greatest soccer disappointments are not winning College Cup while I was at UNC and also not qualifying to go to the Olympics.

To always be humble.

Some of the most talented teammates I’ve played alongside are Mike Farfan, Zach Lloyd, and Brek Shea, just to name a few.

I think the toughest opponents for me are guys like Brek Shea, Chris Pontius, and Graham Zusi. Those three guys are always dangerous around the goal.

I would like to think I would have put my time and effort into playing another sport, either basketball or football.

My ultimate definition of success in the game is winning. I think in any sport all the great players are measured by winning.