The Real Salt Lake defender on his admiration for Beckham and the value of hard work. 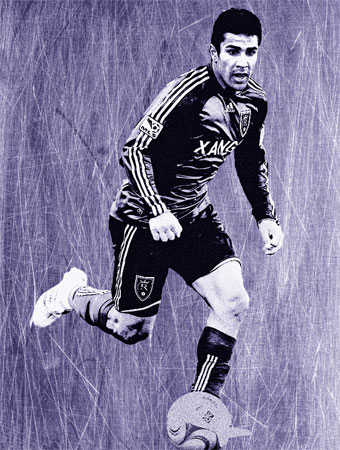 My earliest memory of soccer is from when I was five years old. My favorite cousin Todd is 16 years older then me, and he used to come by my parents house and kick the ball around with me in the front yard. He bought me my first soccer ball and introduced me to the sport that would become my life. I am forever grateful.

I had many soccer heroes growing up. As I aged and my soccer IQ began to develop, I could understand and appreciate more footballers' abilities. The most consistent league that I watched growing up was the EPL. And if I had to single out a player that I admired most consistently growing up it would be David Beckham. I loved watching him play for Manchester United and England. His work rate and commitment was beautiful to watch. I remember when he'd lose the ball something inside him would ignite. He would fly towards his opponent and we all knew he was going to crush him. Foolish at times but his blinding passion would give me goosebumps.

My first experience suiting up with the USA began in an unfortunate way. The first camp I was called in to was when I was 15 to compete in Dallas Cup with the U-16's. The first training session I hurt my knee and was forced out of the rest of the camp. But a year later I was given another chance and was called in for a youth tournament in England. I came in off the bench up top for the last 10 minutes and I was so elated I didn't stop sprinting the whole time, though I'm not sure I touched the ball more than twice!

The quality I most admire in a footballer and in life is hard work. My father explained to me at a very early age that in my sport and in life there will be others who are naturally more talented than me. However if I outwork these people, I can achieve more.

To appropriately contrast my favorite quality, the quality I least admire in a footballer is laziness.

My father and hard work.

I am constantly trying to improve my decision making. At the highest level it is critical to understand where the ball needs to move to at the right time, based on the flow of the game. Continuing to develop my soccer brain as I get older will benefit and prolong my career.

The greatest influence on my development has been my father. Though he was not initiated with the sport before I developed an affinity for it, once he saw my interest he was constantly encouraging me in all the right ways. He coached and managed all my teams growing up, and almost every day after he'd get home from work he would help me train at the local park. As I got older and began to be recruited by Club Teams and eventually colleges, his research and guidance helped me make informed decisions on what was best for my development. He never fails to watch my games today and discuss them with me afterwards. He is my biggest supporter, and a great man.

Soccer has been the foundation for almost all of my serious friendships. I have met so many people who I can say with confidence I will know for life and it would feel wrong to single out one as my closest friend.

My greatest soccer achievement would be winning the MLS with RSL.

The most important lesson I have learned from the game is humility. Even with success one has to always constantly have the desire to improve. Never be complacent. If you really love the sport then you will never quit trying to get better.

Javier Morales and Kyle Beckerman. They are both fantastic players in their own ways. But both are good men off the field. I would follow them into battle any day. It is a privilege playing alongside them.

Very difficult question. I have been lucky enough to play against some great players. One that stands out is Alexander Pato. I played against him and Brazil at the U-20 World Cup. His movement and touch were first rate.

If I was not a professional soccer player (and someday I won't be) I hope to be working in publishing.

My ultimate definition of success... success is relevant based on perspective. It should only be used as an idea to drive us further and further.