The rookie defender describes assimilating to the pro game and New England. 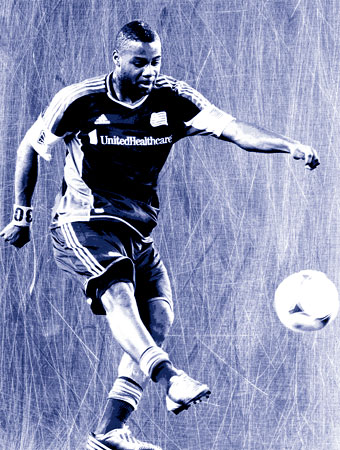 My earliest memory of soccer was probably youth soccer back in Louisville, Ky., when I was like three or four and my mom was my first coach. Playing with my mom was kind of fun and kind of cool.

I would probably say—he’s not really famous—but it’s my brother. I always looked up to him and he played soccer. He didn’t play in college or anything or pro, but he always taught me the way to play and stuff and he’s my big brother, so that’s always pretty cool.

Hard work. We’ve got a lot of hard-working guys on our team and I think that’s what I look up to. Sometimes you won’t have the best days in practice, but I see a lot of guys working hard and trying to improve, so that’s always pretty cool.

Well, I’ve played with a lot of good players and a lot of good teams, so just being around good teams has helped me grow. I’d like to think that I have a good work ethic so that’s something that I always try to do—just work my hardest.

Probably my crossing. I’ve never really played outside back, which is what I’m playing right now and you need to do a lot of crossing for that position. So I’m learning that as the season goes on and progresses.

I’d say that there has been a lot of people. All of my coaches have helped me a lot. My coach at University of Louisville, Coach (Ken) Lolla. My (United 1996 FC) club coaches—Muhamed (Fazlagic-Fazla) and Braco (Jusufovic). I mean, even Coach Jay (Heaps), in the short period of time. All the coaches here have been super helpful in my development. I think my parents as well, instilling that work ethic in me and my brother and sister—that’s helped a lot.

I enjoy all the rookies. We’re kind of tight because we came in at the same time. I like Scotty Caldwell—he’s a nice kid, Kelyn (Rowe)’s all right. Everybody’s pretty nice. There are some days that you don’t get along with some guys, but it happens.

Probably coming here, getting drafted so high and being able to join this organization. Hopefully there’s more to come, but so far, that’s the biggest one.

Probably this past weekend (June 15 at Vancouver Whitecaps). I got a red card. It’s the first red card I have ever gotten in my life and I kind of let the team down a little bit. It sucked, but that’s probably the biggest disappointment so far in soccer. It’s weird that it’s so recent.

Teamwork makes the dream work. I don’t know, just playing soccer and how some things can unite so many people together and become like a brotherhood. Everyone’s so close here and it’s just fun to play. It’s not really like a job—it’s a sport I love to play and I get paid for it, so it’s pretty cool.

We’ve got a lot of them here. I think Diego (Fagundez)’s going to be a big-time player. There are a lot of guys here. Kelyn’s another big-time name. I think one of the guys I played in college—his name’s Nick DeLeon—he plays for D.C. United. He’s going to be a really good player. I’ve played with a lot of good guys.

Thierry Henry for New York Red Bulls. For D.C., Kyle Porter—he’s pretty good. I mean, in practice every day going against these guys is pretty tough. That’s why it’s easier in the game; I have to play hard against the guys in practice.

Probably a piano player—I like to play the piano. Or a musician or a comedian. Or an actor. I’d like to be an actor, one of those three. Something performing, I don’t think I could do a desk job.

I think the ultimate definition of success is when you are enjoying what you do every day. I think that’s being successful. I think that when you don’t have to worry about what you’re getting paid, as much as what you’re doing and if you’re enjoying it, I think you’ve reached success.