The Toronto FC striker discusses what it will take to elevate his game with the U.S. national team. 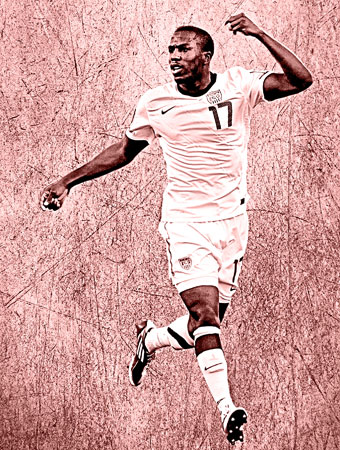 Going to see my sister, Lindsey, play in a game. I just remember the field, her, and the ball.

It was nauseating but not because I was nervous. I ate something bad during the trip to South Africa, which led to me being slightly under the weather for the match.

I think vision. It's important for players like me.

The key has been having patience in developing my skills and knowing that success doesn't come overnight. You have to work for it.

I think I need to become a better overall player. There are areas where I know I can always improve.

Making the USMNT World Cup roster and playing in the event I always dreamed I would be a part of.

That you have to be patient. Nothing is ever going to happen when you just want it.

I would be in college right now, studying to become an electrical engineer.

Reaching your individual maximum potential inside a team environment, which leads to great accomplishments on the pitch.