The versatile defender-midfielder honed his game in Houston before jumping to Stoke. His star is rising. 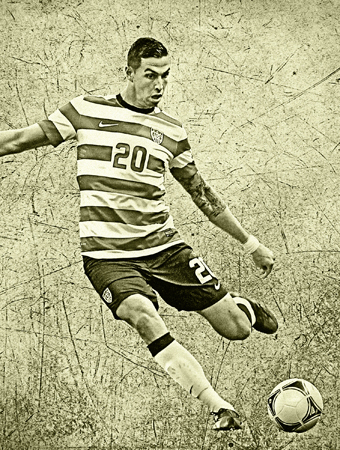 Growing up playing soccer with my father. My dad used to take me to the park. We would just run around and kick the ball. We'd watch soccer on TV, and then go outside.

I loved watching Zinedine Zidane. For me, he was one of the best to ever play. Edgar Davids was another player who I admired. Locally, watching Joe-Max Moore for the New England Revolution was pretty cool.

It was exciting. It was an honor. More than anything, I think, every player's dream is to play for their country. Once you put on that jersey and you're wearing the crest of the United States, it's pretty cool. It gives you some chills.

The calmness. How relaxed and smooth they are on the ball. That's a skill you can't teach. It's a natural ability.

Being pricks. There are some guys who are hacks. They are not technically soccer players. They just go in and try to boot you. Those guys will eventually get weeded out.

Like my dad always said, discipline, dedication, desire. The three Ds. You have to have that to succeed in life, whether it's being a journalist or whatnot. You have to have dedication to the things day in and day out, and the discipline to do so. And, obviously, the desire to keep your head down and stay focused.

My father. 100 percent. There are coaches along the way. Even Dom Kinnear has been one of the reasons why I've had success with the Dynamo. He's given me opportunities and he's given me a chance to grow.

I would say Corey Ashe and Bobby Boswell. They are two of my closest friends. Bobby and I were brought here together with the Dynamo, and living with Corey for four years made us really good friends.

I don't think I have hit my peak yet, so I can't say that right now, but I think being able to play soccer for a living.

Not winning an MLS Cup.

It's a short career, so enjoy it while you can. Don't take anything for granted, especially those days when it's tough. You get disappointed and upset, but you have to think that you are doing what you love for a living.

Richard Mulrooney was a class act. He could do anything. Brian Mullan was great. Dwayne De Rosario. Stu [Holden].

The guys from Manchester United: [Wayne] Rooney, [Dimitar] Berbatov. And obviously Saha. But those are guys I want to play against on a regular basis.

I'd be coaching or doing something with soccer because it's in my blood.

Knowing that you leave it all on the field. You might not have had a good game, but you worked hard. No one can ever say you didn't work hard. I think staying mentally focused throughout your career and not getting distracted by things off the field. Just being a good person and being true to who you are as a person. Don't try to alter who you are because of certain people. I think I'm pretty straightforward and I'm an honest guy. If you don't like it, that's tough for you.