The New York Red Bulls defender is trying to fight his way back on to the Stars and Stripes. 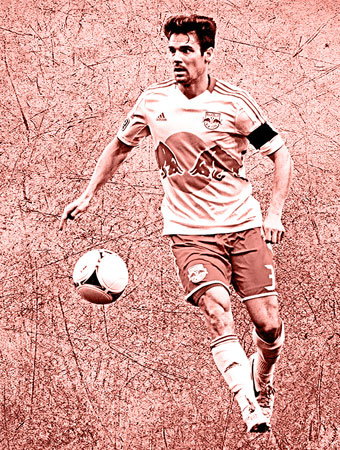 My earliest soccer memory was probably when I was around seven or so when I really got into it, borrowing the "500 Greatest Goals" and "500 Greatest Saves" videos from some of my teammates. That was probably my first true memory besides playing with my friends in my front yard when we were young.

My hero has always been Roberto Carlos before I was even a left back. As an attacking player going up, I loved watching Roberto Carlos. He kind of revolutionized the position.

I was in Hampden Park in Scotland. It was an incredible experience coming from college and then my first year out of college, playing in Denmark. To go up and represent your country that same year was quite an honor.

Drive. I think that’s what separates a lot of guys, especially with the culture growing up here in the U.S. Just having that drive to be great. That’s what I admire most of guys who might not have the most talent, but drive is what carries them.

Selfishness. It’s probably the thing I dislike. Guys who only play for themselves and their own glory make it hard to be a good team.

If I can improve one thing, it would be finishing chances in front of goal.

Probably Clive Charles. He was my college coach for two years before he passed away and he was the one who moved me back to left back and saw a future for me as a professional at the outside back position. He was always hard on me and honest, but very rewarding as a coach, so he was probably my greatest influence.

I’ve made so many close friends along the way but probably right now, Dax McCarty is my closest friend in the game. I have a lot of other close friends in the league, but Dax is one of the ones I keep in touch with consistently.

Probably playing my first match for the national team. It’s something I’ve always dreamed of. Also, playing my first professional game. Those are two things that myself, as well as many others, never thought would happen but I kept believing, I kept going. To achieve those things has been great. Obviously, I have other achievements that I hope to reach in my career.

Probably not making the World Cup in 2010. I was in the final 30-player pre–World Cup camp, and to take 23 from 30 and be in the seven that didn’t make it was tough. But it’s given me the motivation to keep fighting and hopefully get in the national team again.

That you’re only guaranteed today. As cliché as that sounds, I’ve seen a lot of guys come and go in just the years I’ve been a professional. I’ve learned just to never take it for granted and sometimes, you have to stop and enjoy it and not get too caught up in the business aspect of it.

Talent-wise, you obviously have Juan Pablo Angel and Thierry Henry. I’ve played with both of them, both incredible strikers but very different strikers. They’ve both been extremely successful in their careers and good mentors and positive influences on me when I was with Chivas and during my time in New York. We also have Rafa Marquez—all of these guys have loads and loads of experience and have really helped me with some of the small things that I’ve really needed to develop.

Toughest would include Ronaldinho. I’ve played against Robinho, Lionel Messi, Sergio Aguero, Xavi, David Silva—he was a tough opponent to play against—and then David Beckham. When I played England at Wembley, he was a tough guy to play against. He was a lot more aggressive than I thought he’d be. There are a number of good players I’ve been lucky enough to play against.

Now, I would probably think I’d own a fashion line of some sort or do something with music, whether it would be DJing or something else.

Maximizing potential. If you can become the best you can be, then that’s all you can ask for. The next part about it is enjoying it, having fun. If you can maximize that potential and reach that level of fun that you deserve, then the game should be enjoyable.