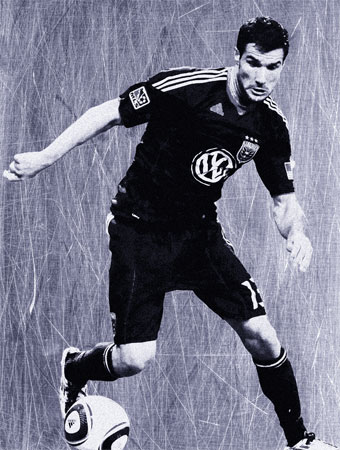 My earliest probably was just playing for—you know how you play co-ed when you’re 5 and 6? I was on a team called "The Riptide" and I just remember playing. My dad was one of the coaches.

Growing up in L.A., in Southern California, I watched the Galaxy. Cobi Jones, players like that. I remember watching him a lot on TV, so I’d probably say Cobi Jones on the American side of things.

The first [time getting called into camp] was right after my rookie year and I just remember being excited. I was actually with some friends and so they were happy for me. I called my parents and let them know. I think it was a joy, but at the same time, I knew there was still a lot of work to be done and there still is. I'm looking forward to hopefully getting my first cap soon.

Some people have egos as athletes.

Consistency. Game in and game out, I want to be a threat. As the season goes on, sometimes there are games where I don’t have the impact on the game that I should. I want to make sure that I’m a constant threat—a player that defenders don’t want to have to play against.

The coaches here [at D.C. United]: Bennie [Ben Olsen], Chad [Ashton], Wolffy [Josh Wolff]. It’s a tough change when you come from college here, so it’s a lot of figuring out—especially me moving from the West Coast here—so a lot of people don’t see the issues you deal with off the field. It kept me grounded, kept me working hard, so I think they know the sky is the limit for me. They keep pushing me every day, and I can’t thank them enough for that.

Probably Rodney Wallace. We were roommates here for our first two years and now he’s in Portland. We stay in touch all the time.

Getting to the Eastern Conference finals this year.

Injuries as a professional. My hamstring injury, my broken leg—they were tough to overcome, but I’m over them and I think they actually made me stronger as a person. But when you’re out of the game that long, you miss it.

As an athlete, it’s kind of an emotional ride: from scoring two goals in one game to not having a good game the next one. So, to keep an even keel and to always keep focused on what your goals are. Just don’t let the highs get too high and the lows get too low.

Dwayne [De Rosario], Jaime Moreno. They’re winners. To be honest, I think that’s the greatest quality. You don’t see Dwayne doing stepovers or anything crazy like that, but his will to win is unbelievable and I think that’s what makes him a true competitor and why he’s gotten so far.

I think I would still be involved in soccer somehow. I love the game, I like being around the game, so I would be coaching in some capacity. I don’t have to think about that, hopefully, for another 10 years or so. I’ve thought about it, but I think I want to stick in this sport.

I think it’s different for every person because different people have different qualities and different abilities and so, I think for an ultimate definition of success, I think it’s how far you can push your body and knowing that you’ve given everything—kind of leaving it all out on the field every game, every practice. And I think that’s how it defines you. Some players are going to score 20 goals one year and some are going to score 10, but as long as the guy who scored 10 gave everything he had, that’s success.