The longtime Crew player, who has been in MLS forever, credits his dad for teaching him the game. 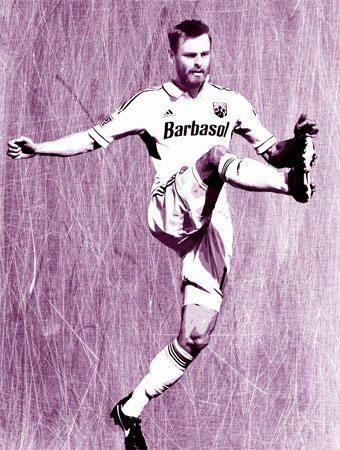 Playing with the local rec team when I was four years old. My dad was the coach.

I don’t really know if I had a “hero,” I just looked up to my dad. He played soccer at Rutgers for four years. I learned the game from him.

It was an incredible experience against Poland in 2004. It’s something every single player wants to do and I’ve been very blessed to have the chance to do it several times in my career. So it’s an awesome honor.

I’d say work ethic. It’s always encouraging seeing someone willing to put in the effort, willing to go the extra mile for his teammates.

Make the extra run on offense and on defense, help the team on both sides of the ball, and do all those little things that I can on the field to be able to help the team.

There’s many. I guess I’d say my heading. I get some decent opportunities with my head sometimes throughout the course of the season and I’m not always as sharp as I feel I could be.

That’s my dad for sure. Ever since I first started playing, I call him after every single game. It’s always nice to get that outside perspective on how I look and also how the team looks. I learn things from him to try and make it better each game.

When we didn’t make the playoffs because it always ends the season on a sour note and just leaves a bitter taste in your mouth.

Just to be thankful. It’s such an honor to be able to play soccer for a living, to get paid for it. I see it as a huge blessing to be able to come out here every day. So many people don’t have jobs, so many people don’t like their job and I’m able to come out and basically kick a ball around and get paid for it. That’s probably the biggest thing that I’ve learned: to always have a humble mindset and a humble attitude towards being able to have the opportunities that we have.

All-around probably Chad Marshall. I think in terms of the all-around player he’s just so dominant at his spot on the field. I’ve been able to play with him for the past seven or eight years and watch him play every day in training. It’s definitely made me a much better player.

I remember playing in the Copa America—I forget what year it was—we played against Argentina and I think they beat us 3-0 or 4-0 and I remember just thinking to myself, “These guys are a step above me.” And I just had this feeling that they were so much better than I was.

Probably something involved with the Roman Catholic Church. It’s a huge part of my life. I don’t know what it would be, whether it’d be teaching or some other aspect like that, but it’s a huge part of who I am.

That’s a tough question. I’d say it’s being the best player and best person you can be—reaching your maximum capability and your maximum potential as a player and also as a team.