The young Revolution attacker on idolizing Brian McBride and learning from Benny Feilhaber. 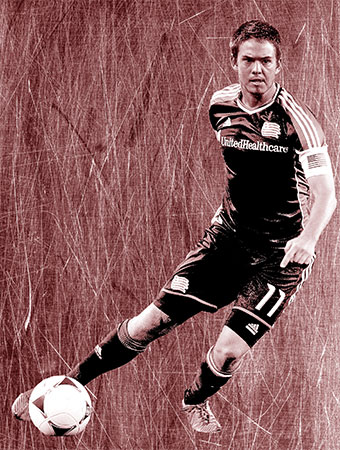 I guess my first memory would be in the backyard, kicking the ball around with my parents. My dog was kind of chasing it around and I kicked it, and I hit my dog right in the face. But it was my first time really hitting a ball, so that was pretty funny.

I had a lot, but I would have to say Brian McBride would be one of my top guys. I grew up watching him, Cobi Jones, and all those guys that are old school.

Well, the first experience actually with the U.S. jersey on would be for the U-18s when I was in Uruguay. That was a great experience. I didn’t start, but I thought maybe I’d get in. I got in for about 20 minutes and my coach told me, “You know what, Kelyn, we’re up. I want you to go just work your ass off.” And I said, “All right, I can do that.” And I ran, and I ended up almost getting a goal. On my first trip I never got a goal; I never really got an assist. I was just kind of there. But I think my first experience with scoring and getting a real look was when I was with the U-20s. It was a great experience.

Soccer savvy. You have to be able to know what’s going on in the game to know to do everything else. If you’re smart enough to do it, you can will your body to have a little bit of the skill and that kind of stuff. Soccer savvy and soccer awareness.

As a soccer player or as a person, you’ve got to have the will to work. I think it’s something that I’ve always grown up with and it’s been kind of pounded into my head. If things aren’t going right or when you can’t do anything else, all you do is work hard. And if a player doesn’t do that, it’s very frustrating for me.

The key to my success is that I’ve had fun throughout my 16 years of playing. And at 20 years old, I’m still learning. I learn from my mistakes and learn from the players who are above me. Right now, I’m a rookie. I’m 20 years old playing with some guys who are 30. They have played and know what is good and what isn’t good, and they tell me every day. So if I’m learning from that every day, I can only get better.

There’s a lot. I definitely would say my physicality isn’t the greatest thing right now. But with the soccer skills, it’s just having the awareness of where everyone is on the field, whether my teammates or my opponents.

Growing up, there were a lot of coaches and family members. But I guess this year, as a 20-year old rookie, I think the biggest influence might have been Benny Feilhaber and he doesn’t even know it. He plays against me most of the time; they don’t put us together much. But whether we mark each other or not, I’m watching ways he turns the ball, how he looks for other players and different runs. And when we do play together, we look for each other so much. He helps me with everything that I do, whether he knows it or not.

Well, it changes. You always have friends on the team, especially when you go on the national team. I guess on the national team, Perry Kitchen and I really clicked throughout our time with the U-20s and the U-23s. And, of course, when we play D.C., we’re always hanging out. But with the team that you’re playing with, you create different bonds and have different reactions to different players. So it’s tough to say who your best friend is, so I don’t know. I can’t answer that!

To be honest, just getting drafted is an honor in itself. But it would probably be scoring for the U-20s right now. I was on top of the world to be able to help that team to do what we did. Unfortunately, we didn’t go any farther, but to be able to say that I made an impact with that team was a big accomplishment for me.

It would probably be the same thing: the U-20s. That was very disappointing, that last game. We ended up not qualifying for the U-20 World Cup. It was one of the most heartfelt losses that I’ve ever had and that the team has ever had. The guys sat in the locker room for about 10 minutes and not a word was spoken. You could tell all around the room that no one felt good and that feeling in the back of your throat is never good.

That you need to slow down sometimes. Like I’ve said, I pride myself on working hard and going at things 100 percent. But there are times when you need to just calm it down and slow the game down a little more, and I’m starting to learn that as the years progress.

A guy with foot skills, vision, and all that would be Lee Nguyen. He’s unreal.The amount of touches he can get before beating you is unreal. Then you have a great finisher in Saer Sene and great defenders along our whole backline with A.J. Soares, Stephen McCarthy, Darrius Barnes, Kevin Alston, and Chris Tierney. I would say it has to come with position—you can’t just pick out one guy.

Again, that’s hard, playing the different positions that I have. Trying to win a header from Kei Kamara was very difficult, I’ll tell you that. And going at a backline of Todd Dunivant and the LA Galaxy wasn’t easy either. Everyone’s difficult, good in their own way. Maybe you can take a player on one-on-one in one game, and then you can’t in the next. You have just got to find ways around it.

Right now, since I am 20, I’d be in college. But if I were out of college, I honestly have no clue because since I’ve been a little kid, I’ve always said, “I’m going to be a professional soccer player, Dad.” And my parents would say, “OK, just make sure it happens because you can’t do anything else.”