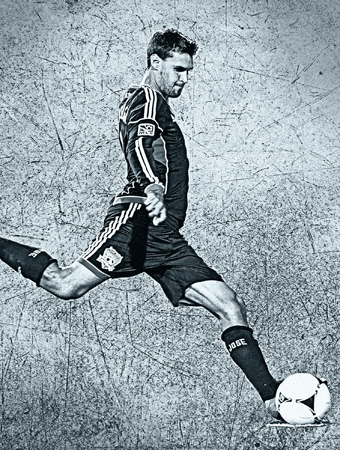 I remember playing growing up, and there are pictures of me dribbling a ball ever since I could walk. Soccer has always been a big part of my life.

I had a few. You know, my dad played soccer. I think he is the one who really taught me the game. But growing up, I think obviously [Eric] Wynalda played a big part. He was a great striker. I think [Jurgen] Klinsmann did as well. He was a great and another player that I looked up to.

That was a dream come true, just to have and see that crest over your heart and hear the national anthem. It gave me chills.

Tenacity. Love that. Love anyone who is out there willing to just play and fight. Also, it can sometimes be a considered a low quality, but I think it’s in the best players.

I am going to say dirty. I love tenacity and aggression, but there's no need to do dirty stuff.

I'll say my first touch, because if you don't have one you won't get a second touch. I'm constantly trying to improve my first touch.

Probably my dad and my assistant coaches.

I have a couple: losing the NCAA Championship Div. II. Also, losing in the 2010 Eastern Conference Finals to Colorado, which was pretty disappointing.

To never give up. You know, things might not always go your way and there will always be adversity, but you have to fight against it and just keep growing.

Stuart Holden is definitely one of them. [Dwayne] De Rosario. Brad Davis. Giovanni when he was here. He was definitely a special one. I love playing with [Steven] Lenhart. I think he has been the greatest partnership I have had with a forward. It’s just a joy to play with him.

I am going to go with Pique. When the U.S. played Spain in Boston, I got a half against him. He is pretty good.

I think I would be teaching and coaching. I have always loved coaching soccer, but I'd get my degree in liberal studies to become a teacher.

Being happy and championships.