The Mount Sinai, New York native dishes on his life at SønderjyskE and his USMNT dreams. 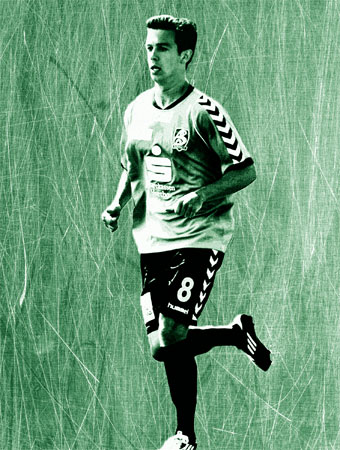 My earliest memory of soccer is kicking the ball around with my dad and my brother in the backyard. My dad even put up a big wall in the yard against the fence so we could practice our shooting instead of hanging out inside all day.

Thierry Henry was a player that I really enjoyed watching while I was growing up. He is the reason I began rooting for Arsenal and it was always exciting to watch him play.

I haven’t had that first experience yet, but I think about it often, and I am doing everything I can to try and earn my first cap for the USA.

The quality I most admire is a winning attitude. There are a lot of talented players out there that can do cool tricks with a ball, but at the end of the day, winning is what is most important to me.

The quality I most dislike is selfishness. As I mentioned earlier, winning is the most important thing in my mind and I would do anything in a match to get three points. I don’t really appreciate it when players don’t give it their all for selfish reasons.

I know it is sort of a cliche, but I honestly believe that my heart is the reason for my success. I outwork a lot of my competitors and I will do whatever it takes to win. That is something that all of the teams I have played for have done well.

If I could improve one thing it would have to be set pieces. I really enjoy shooting from distance and I train it extra every day after practice ends. However, I would like to be more consistent at scoring free kicks from 25-30 meters.

I would definitely say my father has had the greatest influence on my development. When I was younger, the two of us would watch game after game on television. He would never pressure me to do that, but we enjoyed that time together and I am one hundred percent sure it helped develop my field vision today.

It’s a little funny to say, but I think one of my closest friends in the game has to be Quincy Antipas. He was a teammate of mine here at Sonderjyske. Unfortunately, the club sold him to another Danish Superliga side, Brondby. However, we still keep in touch almost daily. I think the reason we became so close in our limited time together here was because we both had to go through similar struggles just to get where we are today. Plus, he’s a few years older and is playing for the Zimbabwe national team so he is proof that if I work hard I can achieve my goal of playing for the U.S. one day.

Winning the U-18 National Championship with my club team, Terryville Fire, was definitely the greatest achievement of my soccer career. It was an amazing summer with a great group of teammates... something none of us will ever forget.

To be honest, my greatest disappointment was not being drafted into the MLS. I had worked extremely hard to be noticed and felt that it was something I deserved, but then the day came and went without my name being called. It was definitely a shock, and something I didn’t think would happen to me.

The most important lesson I’ve learned is that things don’t come easy in life. You really have to work hard to be successful. There are a lot of talented players in the world, and not all of them make it. You have to put in extra work every day and take care of your body.

Currently, my teammate Lasse Vibe has been caled up to the Danish National Team. I would also have to mention my teammate Tommy Bechmann who played eight years in the German Bundesliga, and as I said before, Quincy Antipas who plays for the Zimbabwe National Side.

In the Danish Superliga there are a lot of talented players. Some of the Americans I’ve played against include Clarence Goodson, Michael Parkhurst, Charlie Davies, and Chris Rolfe. There are also lots of Danish National Team players in the league. Too many to name individually. I remember watching them in the European Championships this summer and I had played against nine of the players on the field for Denmark.

I had always planned on going to Law School when I was younger. I come from a big family of lawyers, and even though they encourage me to do other things, I’ve always found law classes interesting and challenging at the same time.

I’ve thought about this a lot recently and as I said before, winning is the most important thing in my mind. However, I think each player has to set their own goals in their own mind and try to reach those. Once a player achieves those goals, then it is time to make new goals to be successful. It is no secret that my main goal in soccer is to play for the US National Team. If I can manage to get their one day, then I will adjust my goals to try to be even more successful.