The Los Angeles Galaxy striker, the team's youngest signing ever, reveres his Galaxy teammates and refers to Wayne Rooney as an "oldie." 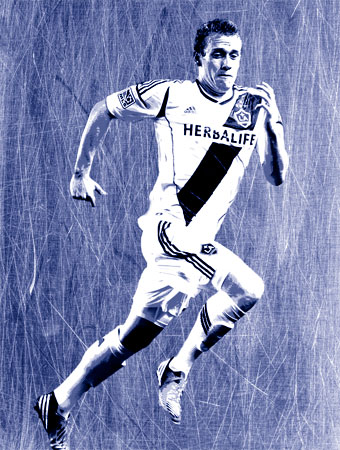 It would have to be when I was on the all-star team in youth soccer. It was me and a bunch of my best friends, and my Dad was one of the coaches along with all my other friends' dads. It was fun. I didn't know any better. My Dad taught me a lot.

I was always a big Man United fan, so I liked all their stars. I was a big David Beckham fan when I was really young. Once I got older, I was a big Ronaldo and Rooney fan—I liked all the oldies from Man U. Getting to play with Beckham was pretty crazy the first couple of months. Then he just became another normal teammate. Just one of the guys.

It was cool. I made the U-17 World Cup team. I didn't play that often, but I got in one game. It was an honor and a lot of fun. The players I played against were way better than anyone I'd faced before. The atmosphere when we were playing down in Mexico was an eye-opener. They hated us, so it was loud and crazy. But it was a good experience.

Probably just the ability to never give up. What some of these guys do physically is impressive, but the mental side is probably even tougher. They get so much scrutiny. The media is all over them all the time, and they still perform. That's pretty cool to see.

Some of the cheating stuff in the game, like the diving on clean tackles. When we see that on replay, we're like, 'C'mon, get up.' It helps when you see a slow motion replay of that.

My ability to get in the right places and score goals.

There's a lot. First off, my fitness and my first touch. My runs in the box can get a lot better, too.

There's not necessarily one person. The coaching staff here does a good job with us after training, helping us out with whatever we need.

I'm roommates with with Jose Villarreal and we spend a lot of time together. We were together on the U-20s, so we became pretty close then. Away from the field, we just hang out a lot. When we're on the road, we'll go out to walk around and explore the cities.

Being professional at my age, probably. I still have a long way to go, but I already have two MLS rings. That's pretty cool. I'd like to have one that I earned from playing more. That gives me a lot of motivation.

That's hard to say. Things have gone my way for the most part so far. Like I said, I already have two MLS rings. Maybe not making the U-20s roster or the injury [fractured left clavicle] this season. Both have been really disappointing.

There are a lot of things I could say. Guys will yell at you and you can't take it personally. That's just the way the game is. You have to man up and get on with it.

All these guys with the Galaxy are really talented. David and Robbie and Landon are three of the Galaxy's best players ever. They're pretty incredible.

Probably Sergio Ramos and whoever else was playing back there for Real Madrid for the 20 minutes I played against them. Those guys are world class for sure.

That's hard to say until you're done playing and can reflect back on what you've accomplished. Hopefully, that's not for a while. We'll see how my career goes and hopefully that question will answer itself.