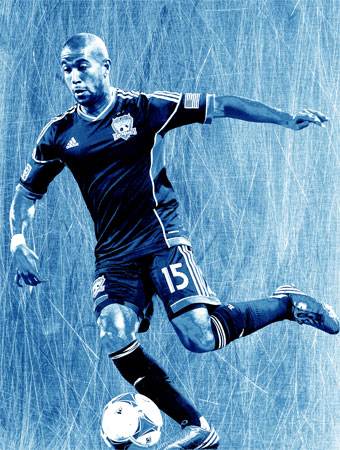 My earliest memory is pretty funny. I remember my mom driving me across the city to go to a travel soccer match. It was probably around the age of six or seven. Ohio doesn’t have the best weather either so I remember it being rainy, but I had a fun time playing.

I tried to watch as much European soccer as I could, but there wasn’t much televised in the 90s. I’d have to say Zinedine Zidane was a big influence, just seeing how technical he was when he played.

My first experience was when we played against Canada in Houston this January. It was an incredible feeling to just soak it all in. It was a pretty cool experience when the national anthem was playing.

Hard work. American soccer players are very hardworking, and the technical game is also developing. When you have talent but you don’t work hard, it doesn’t always work out for you, but a hard worker can always do well.

Laziness. Someone who’s not defending hard or not working back if they lose the ball.

Staying disciplined and staying humble. When you’re doing well, it’s important to stay humble. If you’re doing bad, you have to keep your nose to the grind and just keep working hard.

I’m always looking to be more technical on the ball. When you look at the European leagues, they’re all amazing on the ball and keep the ball very well. That’s a big goal for me.

Probably my parents. They’ve always been behind me, always supported me. Like I said, my mom used to drive me all over the place, and my dad calls me when I’m here to tell me to keep working hard.

My two best friends from home that I grew up and played in high school with. One’s name is Mark and the other’s name is Barry. They’ve always been there for me. My big development was during high school and a little before that. They were always there with me, pushing me to work hard.

As a team achievement, I’d say winning the Supporter’s Shield was very big. It felt good to have a great season and be rewarded for it. Individually, I’m very proud to have earned a cap for the national team.

Probably the way we handled the playoffs last year. After having such a good season, we didn’t accomplish what we wanted to in the first round. That one still hurts.

There will be ups and there will be downs, but you have to enjoy every minute of it. It’s an experience and it won’t last forever.

Ramiro [Corrales] is really talented. He’s gifted as a soccer mind and very technical on the ball.

I think the whole MLS is growing. The talent pool is so big now that you really can’t take a week off. Every team you play against is going to be good competition.

I have my finance degree so I’d probably be an investment banker. That would be my dream job.

Being successful in this game is having a long career and having won some team and individual awards. Also having your teammates know that you’re someone they can rely on.