The newest member of the Philadelphia Union talks playing against Pirlo and disallowed World Cup goals. 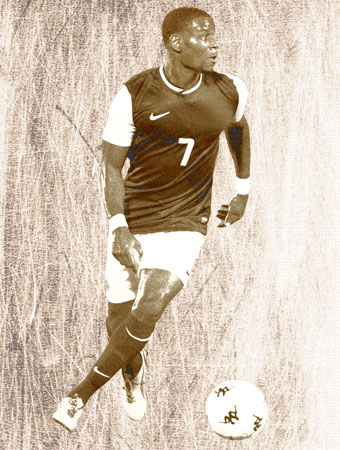 My earliest memories of soccer would be going to watch my father play in this Sunday league. It was mostly just for fun but some of them were pretty good still. When I was real young, he used to also take us to the park as a family on Saturday mornings and have us train. Then we'd come home and watch games on TV. I think my passion for the game was born here.

My father because he's the one who introduced me to the game and helped develop my skills. Zidane, Paul Scholes, and Patrick Viera were all players I enjoyed watching and trying to learn from.

I'll never forget my first experience with the full team. It was a friendly in Switzerland in October 2007. I started the game, and we won 1-0. It was a very special moment for me. Not every player gets a chance to play for his country so each time I do, I'm honored and try to represent the shirt well.

As a midfielder, I think vision, leadership, composure, hard work, and the ability to make players around you better.

Hard work, a strong self-belief, passion, and desire. Not everyone's going to believe in you, but you have to be confident in your own ability and be willing to put in the work to gain that confidence. My passion for this game drives me to want to be as good as I can be and to be successful.

I think my all-around game can continue to improve. I don't think there's a stage when you can stop learning and improving.

Numerous coaches I've had through my career, some who have become close friends as well. But my family is No. 1 for their continued support and honesty.

I've been fortunate to make many close friends in this game. Jozy Altidore and I came into the national team around the same time and room together on trips. He's become one of my best friends.

My greatest soccer achievements would be representing my country at both the Olympics and the World Cup!

Not getting out of the group stages at the Olympics and losing to Ghana at the World Cup. In both cases, I thought we had really good teams and the potential to achieve more. Biggest disappointment of course though is having my game-winning goal against Slovenia in the World Cup disallowed for no reason at all!

This game is full of highs and lows. I've learned to try and keep a balance. When you reach a high, enjoy it but don't (overdo) it. When you hit a low, don't dwell on it, pick yourself back up, and keep working. Also, enjoy every day because you never know what tomorrow will bring.

I played in a charity game this past summer and my teammates included Falcao, Clarence Seedorf, and Edison Cavani to name a few.

Be an actor or involved in music, but I'd still be involved with soccer in some way.

When it's all said and done, I want to look back on my career, smile, and be proud. Look back at all the teams I played for, all the competitions I played in, and all the trophies and medals I've won. Look back and know that everyday I was able to look myself in the mirror and know I did everything I could to help my team win, lose, or draw. That I became the best player I could be and enjoyed the game during the process, too!