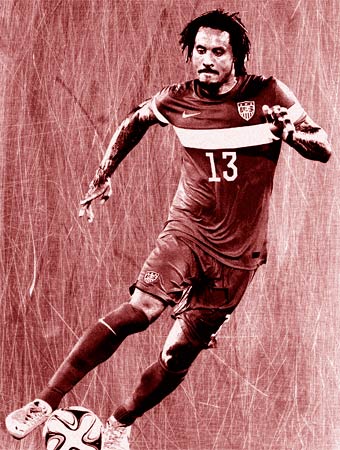 I started playing on the street with my boys in downtown Frankfurt in the area where I grew up.

I never had a soccer hero. I always played for fun so I never looked up to anybody.

I think the whole team and the whole country met me with open arms and made me feel at home.

When I was younger I played for fun a lot of the time. When I made my first step in Frankfurt to the big team in Frankfurt I realized I had the talent and I could make it.

Taking care of my body. It is important when you get older, and you have to be careful.

My wife and one of my old coaches, Friedhelm Funkel.

I have some close friends. Some from Schalke, some from the U.S. men’s national team.

Injuries. If you have big injuries you have to come back and that’s always tough.

To never give up. You always have a chance to come back. All my years where I play now I can say this is true. When you never give up you can make dreams really true.

I’ve played with a lot of young kids like Mesut Ozil and Julian Draxler. Julian Green, of the U.S. national team—he’s a big talent.

I had a lot of time and fun on the pitch against Mark Van Bommel. He was a tough guy but it was a lot of fun.

I think I would be working for a sports agency or something like that.

I try to give 100 percent for every game, so if you lose you lose. It’s a game. I feel like I always give everything to this game. Sometimes you lose the game. I want to go to sleep at night knowing I gave everything to win.