The Crew's last line of defense might have a man crush on Eddie Gaven. 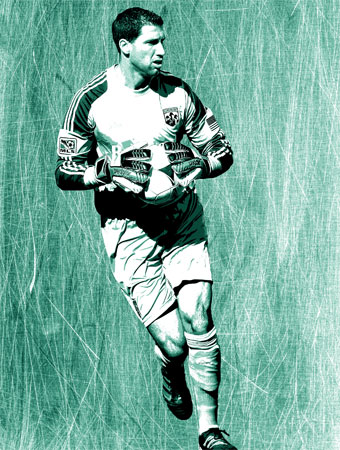 I was on this team called the Brown Team. I think my Dad was the assistant coach and we would just kick everybody’s shins instead of the ball. And my brother was on the team.

I don’t really remember having a specific guy that growing up I wanted to be like until later on when I was becoming more serious about soccer. I sort of leaned towards Brad Freidel a little bit.

Being a team player. I think it’s one of the most important things for the locker room. It’s why we’ve been successful here for so long.

Guys who are just here to collect a paycheck. Or guys who only care about themselves. It’s a team sport and you want guys that want to be here and want to win for the team and not themselves.

Everybody on my team keeping the other team from shooting.

My wife. In college, we were dating for most of college, I went to her and told her I wanted to quit soccer and she convinced me to keep going. There were a couple times where I wouldn’t have made it if it weren’t for her. I’d say she did a pretty good job.

I would say Eddie Gaven. The guy is a legend. Even though the guy doesn’t answer my phone calls or texts, he’s just someone I want to emulate every day of my life.

Obviously winning the MLS Cup in 2008 was huge. Just being a part of that team is something I’ll never forget.

Danny Cepero. That’s all you need to know. [Editor's note: Danny Cepero became the only MLS goalkeeper to score a goal in open play when he scored in 2008 against the Columbus Crew.]

Eddie Gaven. He’s been doing this since his mom dropped him off at Giants Stadium when he was too young to drive; he’s incredible. Plus he’s never stretched a day in his life—so that’s incredible.

Right now I’d have to say Thierry Henry. He’s pretty much had his way with us over the last year.

I’d be continuing with my band. It’s Sloan and the Keepers. #yellowswagband. Look for us.

Longevity. Obviously you can measure success with wins and losses but you really respect the guys who have been doing it for a long time and playing at a high level for such a long time.