The two-way midfielder stars for Real Salt Lake and is carving out a niche on the U.S. national team. 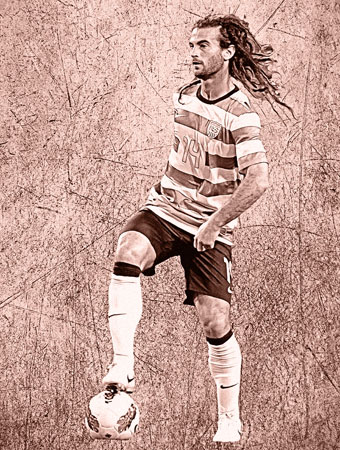 My earliest memory of soccer is playing with my youth club South Bowie when I was about 5 years old. My parents were my coaches.

I started playing soccer because my brother played, so he was definitely my first soccer hero. Later on, as I learned more about the sport, my heroes were the entire USA National Team and the original Ronaldo.

My first experience suiting up for the USMNT was in L.A. against Denmark in 2007. I came on as a sub in the second half. That experience gave me goose bumps, but I had to get past it quick and get myself to believe that I could play at that level, and then do it. I had a few good touches and a good shot that didn't miss by much.

The ability to make your teammates better.

Players who cheat the game, dive, and fake injuries.

Consistency. Always being ready to play at the same high level, whether it's for practice or a game.

I'm always working on achieving the perfect balance of offense and defense for the team.

So many to mention, but my parents have been a huge help in my development. They have always supported my career and have given me meaningful advice to make sure I play to the best of my ability. In addition, I never stop learning from others. I still try to pick up as much as I can from anyone I think plays soccer well.

I've been lucky to gain many friends through soccer. Too many to mention.

Winning the MLS Cup in 2009 with Real Salt Lake. With the USMNT, beating Mexico in Azteca.

Losing the Gold Cup final in 2009 with USMNT. Also, losing the CONCACAF Champions League Final with RSL in 2011.

You never reach a point when you're good enough. There is always something more to learn and to improve on.

I'd be a school teacher like both my parents were. I'd probably teach history or P.E.