D.C. United's emerging star on taking the field with Zlatan and putting all his eggs in one basket. 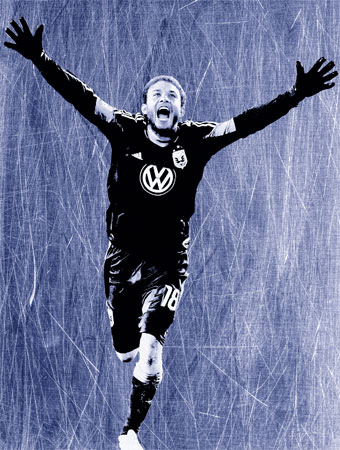 My earliest memory of playing soccer was around four or five, playing with my first team ever in Arizona. I dunno, just kicking the ball around, you know? Running around, kicking the ball, not knowing what I’m doing, just having fun. Mom and dad both played, sister played, so it’s pretty much in the DNA, I guess.

I really didn’t have many, didn’t look up to anybody, no. It was just always my dream to play for the U.S. team, but I didn’t really aspire to be anybody. I loved watching Manchester United, Wayne Rooney back in the day. He was one of my favorites.

[DeLeon has not yet appeared for the U.S.]

Work ethic. Just go out there and give it everything you have at every moment. That’s the biggest quality I admire.

Laziness. I can’t stand lazy players who think they’re too good to pretty much do work.

For me, it’s confidence and hard work. If I go out there and I work as hard as I can, I know it’ll come out alright on the other side. Hard work and confidence—just the belief to get at defenders and the belief in my ability, pretty much. Those are the two biggest things.

Finishing. That’s one area in my game I need to step up. Just getting cleaner shots on goal, more shots on target, and scoring more goals.

Probably my youth coach, Jorge Garré. He had the biggest impact for sure. He was a club coach—I had him, I think, for eight or nine years.

His name is Travis [Campbell]. He was my friend growing up, since I was a little boy. He plays right now at the University of New Mexico. He’s a senior there, so hopefully he’ll be in this league next year. That’s his dream, anyway.

I’d say making it to the professional level.

My junior year in college, losing the national championship to [D.C. United teammates] Perry [Kitchen] and [Chris] Korb, Akron, that squad. That was a heartbreaker.

To do the right things, I guess. To be as successful as I can on the field. I make sure I try and line up the things I do off the field to reflect that success. I’ve never really thought of that. That’s a good question.

I’d have to say Dwayne [De Rosario]. He’s got some talent, that’s for sure. He can do some crazy things.

I’d say playing Zlatan Ibrahimovic was pretty crazy. That was a wild experience. That dude is a strong guy. He’s very tough to play against.

I threw all my eggs into one basket [laughs]. I’m working on the graduation [from University of Louisville] right now. I’d see myself somewhere around the game still—coaching or doing personal training, whatever. Something around soccer, definitely.

Success for me is just really going out there and leaving it all on the field. If you can look back and you know you had no regrets in that game or in that practice, then you’ve had, in my opinion, a successful game, successful practice.