The youngest player ever to score for the U.S. national team wants to improve on that early success. 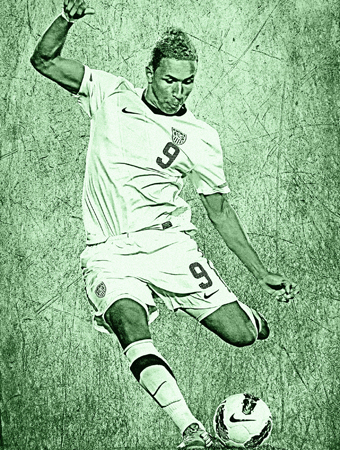 Kicking a little ball around my garage. One of the soft balls that you get at Walmart, not one of the hard ones.

Robinho. I admired the way he played. He looked like he was having so much fun playing. He was so smooth.

Pretty unbelievable. I got into a game that I didn't think I was going to play in, and then I helped the team win. It was pretty...I don't know the word, but it was a good feeling.

Their technique on the ball and their first touch.

Having the passion and love for the game. This doesn't feel like a job. I do it because it's what I was born to do.

Probably the tactical side. I want to think more like a veteran, you know?

As a coach, probably Coach [Richie] Williams [on the New York Red Bulls]. I had him when I was younger, and he actually got the best out of me. I used to be lazy when I was young. Player-wise, Juan Pablo Angel. He's been helping me a lot.

Sebastian Lletget. He plays for West Ham, but we went through the youth system together.

Being the youngest player ever to score for the men's national team.

Injuries. And the Olympics. Getting injured while trying to qualify.

That every day you have to be professional and that you can't take days off.

Thierry Henry and Rafael Marquez. It was awesome to see how they presented themselves. They've been at a high level, and it was good to see the way that they play. They brought over some European swag.

[Jamison] Olave. He reminds me of the Hulk. You can't move that guy. I get mad because either you're big and you're slow, or you're fast and you're small, but he's big and fast. It wasn't fair.

Playing another sport, maybe tennis. I really like tennis. Maybe being a dentist. My mother would help me with that. She's a dentist.