The Brazil native has amassed 41 caps since 2007, is now a vital cog in the Sporting KC midfield, and—who knew?—is tight with Sacha Kljestan. 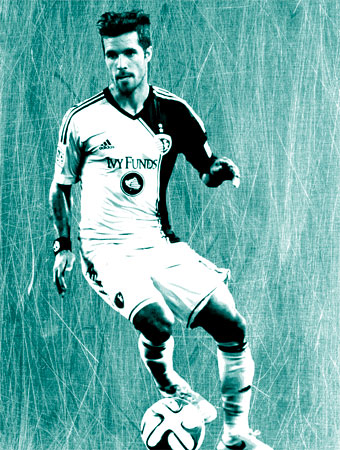 When I was four years old I used to go to a—I don't know what you would call them here but they have them in Brazil—it was a soccer club for futsal. Indoor. It wasn't like a club team or anything like that. But we would always get together and play.

My dad taught me soccer so he could be my soccer hero. Player-wise, there was this striker for Botofogo, the team I used to like. His name was Tulio and he was our leading goal scorer. He was a childhood hero.

The first time I suited up for the U.S. Bruce Arena was in charge. I suited up but didn't play. The first game I played was with Bob [Bradley]—against Ecuador in 2007 I believe. It was great. I started. We won 3-0. Landon, I think, got a hat trick. It was a great feeling to play for your country.

I admire intelligence in a soccer player—somebody who does the right things at the right times.

Playing in the World Cup.

Not beating Ghana in the World Cup.

If you're not improving, you're getting worse.

Internationally, Spain and Brazil. Domestically, the best teams in England and Bayern Munich.

I would love to be a singer but I don't have a good voice. I would love to be an actor but it's more about opportunity (I think I could make it). To be honest, I think I'd be an Econ or Business Econ major. I don't know what I do with that.